Batushka is synonymous with solemnity. This project made up of anonymous Polish musicians has been my musical discovery in this quarantine. Beyond the legal situation that exists within them, which resulted in the formation of two bands that operate under the same name, the style they have created on their debut album “Litourgiya” published five years ago has made them a reference of the music scene in the current era.

Batushka means “father” (in an ecclesiastical sense referring to the priest). Litourgiya’s album cover presents a blurred version of a painting of the Lady of Perpetual Help who is one of the venerated figures within the Orthodox Church, being the main influence in determining the band’s music style combining the roots of Black Metal with church chants performed in Eastern European Slavic contrasting with the guttural voices of the lead vocalist. Their live concerts are distinguished by using Eastern Orthodox habits and schemes that allow them to hide their identities and on a stage level, they maintain that solemnity trying to emulate a mass. 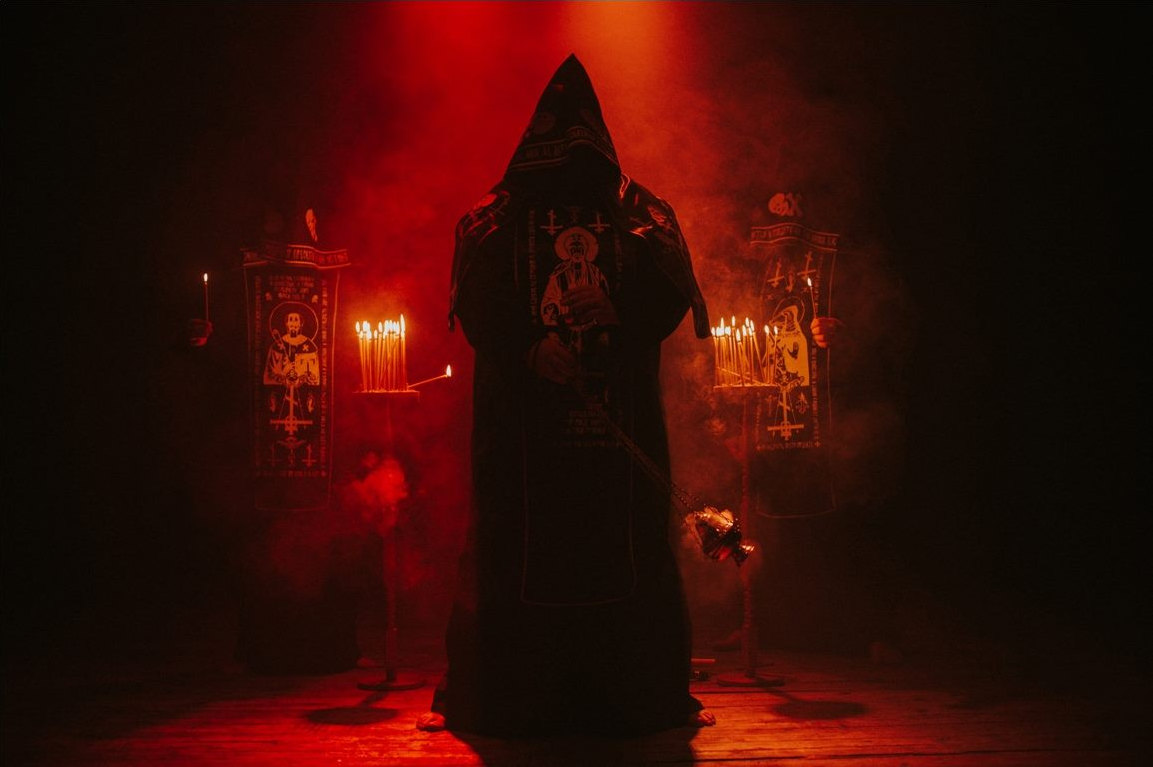 This debut album is made up of seven prayers or liturgies that are taken from the Orthodox Church. The first is “Yekteniya I: Ochishcheniye“ which translates to purification. The sound of the bells to which the chords of the 7-string guitar are added introduces us to that atmosphere of solemnity that exists inside the churches and that is reinforced by the choral part that intelligently alternates with the guttural voices. As the song progresses, the speed in the execution of the drums, guitar and bass is increased, showing that characteristic Black Metal sound.

“Yekteniya II: Blagosloveniye“ (blessing) presents a more aggressive beginning in which the execution of the drums and the guitar is appreciated to which the guttural voices are added, showing us the most extreme facet that the band has in terms of sound. The a cappella interpretation generates a more solemn sound change but that ends up leading to a heavier sound that fascinates me.

“Yekteniya III: Premudrost” (wisdom) presents the sound of the bells and a seven-string guitar in a smooth and constant way, but that serene atmosphere is completely broken when the force enters the double bass drum accompanied by the guitar and the choirs. The presence of Black Metal in its purest sense is in the heartbreaking guttural voices. It is perhaps one of my favorite songs on this album.

An interesting aspect of this album is that it allows each of the instruments to stand out from the instrumentation. An example is “Yekteniya IV: Milost” (mercy) in which the high notes of the bass stand out showing a darker sound closer to doom metal until the guitar intervenes with a series of wild riffs taking up that essence of Black Metal in the one in which the religious songs masterfully contrast with the guttural voices.

“Yekteniya V: SvyatyyVkhod” (holy entrance) continues with this dark and aggressive setting that generates that involuntary headbanging to the rhythm of the music. The alternation between the ecclesiastical and guttural voices pleases me a lot, reaching a point where the two merge. The bass lines in the final part of the song are masterful.

“Yekteniya VI: Upovanie” (hope) begins with the combination of a female voice (with some Arabic influence) and the bass chords being appreciated throughout the song. The inclusion of drums and guitar complement that heavy and dark atmosphere intelligently created by the band in which choral and throaty performance alternate. Batushka’s ability in terms of composition is admirable.

One of the quietest songs of the band is “Yekteniya VII: Istina” (truth) in which the influence of doom metal is appreciated both in the music and in the choral interpretation (the guttural voices are not present). This song takes the term of solemnity to its maximum expression.

The final part of this ecclesiastical ritual is “Yekteniya VIII: Spasenie“ (salvation) that continues with this doom influence that contrasts with the guttural interpretation, coming to dominate the choral accompaniment. The most climactic part of this ritual is created by the drums and guitar in the middle part at the end of the song, taking us to a much more extreme musical terrain constituting a great closing for this debut album.

“Litourgiya” has become a cult album within the scene by creating a concept different from that previously established by other bands of the genre. The religious theme of which the band speaks has been a well thought out strategy on the part of its creators that involves not only the music in instrumental and lyrical terms but also involved the creative part in the album art and what is projects on stage in their live performances. The songs on this album have elements in common such as the crushing riffs of the guitar, the force in the double bass drum of the drums, heartbreaking guttural vocals and a choral accompaniment loaded with darkness, but each of them is a universe of its own. It is an album required to understand the evolution of the genre in recent years.