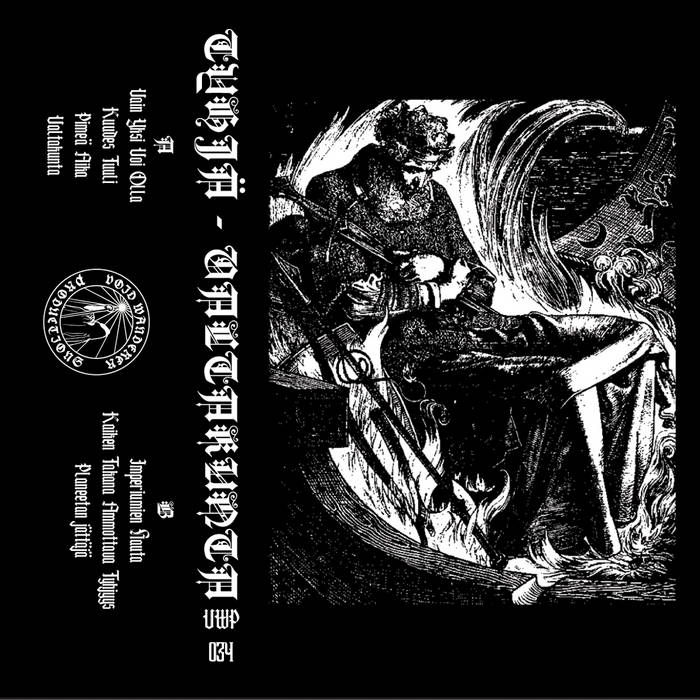 There exists an enthralling quality that resides within the art that is sculpted from the most archaic constructs, for it is like the potter who shapes the clay to the desires of the mind, where the conscious from that where creativity is bred flows like a river unhindered in its course, in turn, it is translated to the marvel that lays before the eyes. In other words, there is no need for any external factors to influence such birth, no need for any superficial adornments to pollute its essence, for if art is fashioned from a mind that is untethered to any entity, then there is no need to for superfluous means to be present to accentuate its wonder

“Valtakunta” by Tyhjä is an album that exudes a primordial candor to its output, for it seeks to rather not to create a maelstrom with the most pristine sounds, instead it harkens back and takes an organic approach in its instrumental architecture, where the musical components feel worn in and almost alive. For an album that is built of the skeletal structure of old-school Black Metal, Tyhjä simply does not pay homage to this art form, rather they draw from its well transcendental spirit which transfigures sound into the very brick and mortar that erects this soundscape of a citadel. What is meant by this is that “Valtakunta” has succeeded in forging a world that anchors the listener’s senses to the very topography of the sounds that comprise the album’s dense atmosphere.

Take for instance a track like “KuudesTuuli” where the song structure is not overly intricate, but it is within its minimalistic composition which bestows a sort of ineffable quality to the song as well as the album as a whole. For it is like the strong winds that flow through the branches of trees, creating their own distinct melody through nature, such is the same feeling when listening to “Valtakunta“ where the simplistic arrangements are what fosters a greater resonance in the aura that dispelled from the instruments.“Kaiken Takana Ammotavva Tyhjyys” is another track that attests to the ‘world building’ this album achieves, now what do I mean when I say ‘world building’? One of the main factors that always entices me within music and especially Black Metal is that for those very few minutes between the notes that are expelled, I believe that within those very sounds, a certain spirit lingers that ensnares the senses connecting them to the roots of the ambience that permeates through the musical elements.

Overall Tyhjä has achieved to encapsulate a rather riveting aura found within “Valtakunta”, for in summary, the very unification of the vocals and instruments conjures a dense yet engrossing journey that is sure to capture and ensnare the listener’s imagination.