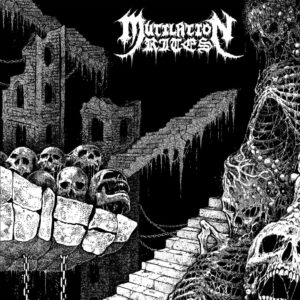 A name that runs synonymous with the Brooklyn Black Metal, NYBM greats Mutilation Rites displayed their archetypal vile presence yet again with another ruthless and unforgiving offering within “Chasm“.

First, I feel that it should be first highlighted that Mutilation Rites delivered a very unique element during the production for Chasm by choosing to record the drum sessions within the venue portion of Saint Vitus Bar in Brooklyn. Tyler Coburn (Yautja) delivered a crushing drum performance for the album, while Bassist/Vocalist Ryan Jones spearheaded the production. The band continued the recording process at their rehearsal space, where the remaining portions of the album were recorded and mixed by Jones.

I was absolutely intrigued by this. If we can talk about Saint Vitus for a moment., from experience (playing a few and attending many shows there) I personally feel that the venue possesses a truly unique and rounded tone acoustically. There is something about that room though… as I do feel that one could also say that an ominous dark vibe lingers deep within those walls, from years of providing an ungodly repose for many wicked and woeful hearts.

The first time I experienced Mutilation Rites live was when I caught them opening for Destroyer 666 at Saint Vitus in the summer of  2016. I was already looking forward to seeing them live, but to my surprise, my initial thought was “holy fuck these guys were meant to play in this room because this sounds incredible …” The set crushed… The energy of their performance displayed a very honest representation of their core substance, which spoke for itself was very, very dark way.

Recently hearing the single “Pierced Larinex” from Chasm,  I was completely taken back to that particular night.

I believe it to be incredible that this band was able to capture such a concrete example their life performance within the studio release of Chasm, while also encapsulation the energy and tone of such an iconic room like Saint Vitus.
Each of the album’s 6 tracks sees the band mix an evocative combination of death metal, punk rock, grindcore, and more to create a new sonic identity, as the band is now joined by drummer Tyler Coburn (Yautja, Alraune.) 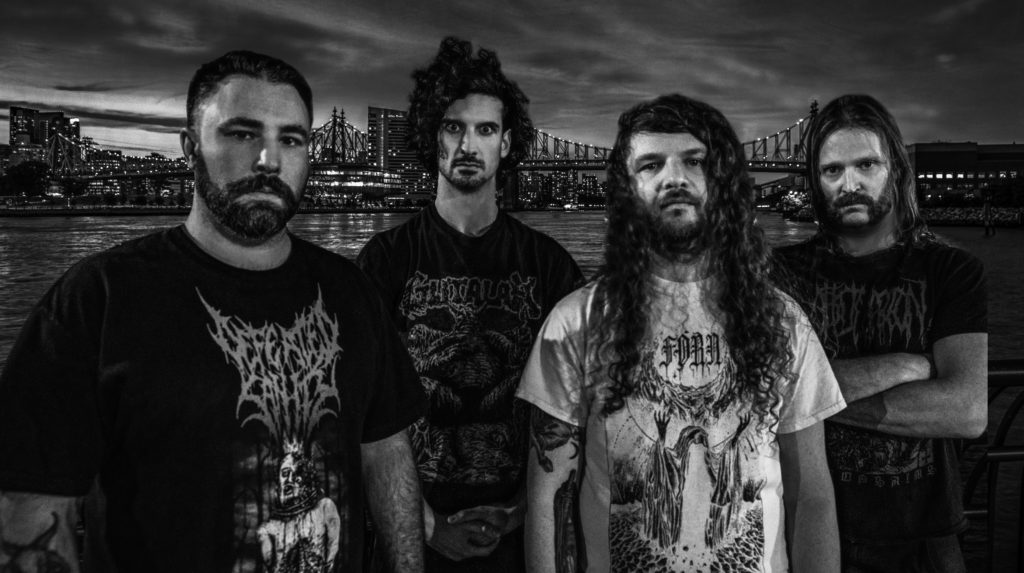 In their recent interview with Decibel Magazine:

“Chasm has a sense of immediacy or urgency that is more prevalent than on your previous releases. Was that something you had in mind when writing and recording?
That could be relative to the listener, but we enjoy that it exists and has affected you that way. We had a goal to write songs that were us, but wanted it to be heavy, dark and deep. When we recorded, we knew exactly what we had to do. We had been playing half of these songs on tour for at least three years. You could say that we gave on recording what we give live, and that we want to be loud and make you scared.”

Start to finish, this album displays a cohesive and now dominate place within their catalog, while also demonstrating the band’s polished evolution. Echoes of classic death metal influences (Morbid Angel, Incantation, Deicide) span through the album, with Ryan Jones adding a more traditional Death Metal tone in his layers vocally as each song digs the listener deeper and deeper into a depraved and horrific place. Singer/guitarist George Paul’s flagship shrieks and wails carry through the album as an ode to true believable agony and suffering, with original member/guitarist Michael Dimmit adding to the horrific foundation needed to support the forlorn frontmen.

Mutilation Rites is a band that will take you to deep waters within your own mind,  then drown you in the dark realm that only they exist in.

Interview: One Master
C. Allen October 24, 2018
This Is Black Metal ©All rights reserved.