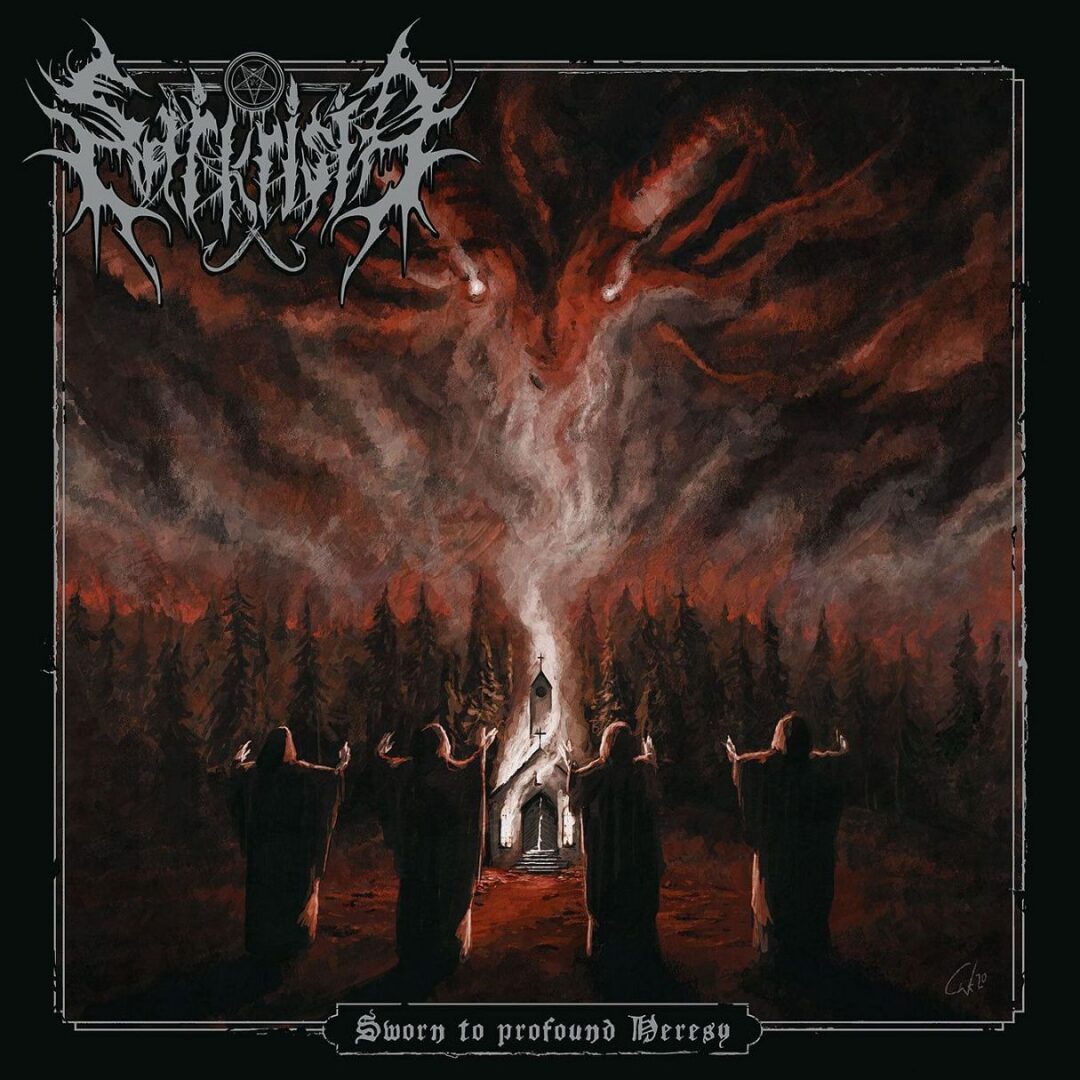 The release that more than any other I eagerly awaited this year, of one of the bands that have impressed me the most in recent years. Known a few years ago thanks to the dazzling debut The Acheronian Worship, I went to listen to all the releases between splits and EPs until, in 2017, the jewel that is the second album and which I consider the consecration to the circle of the best contemporary bands of the genre arrived: I’m talking about Summoners Of The Serpents Wrath, dedicated to the figure of the Leviathan, of which I thoroughly studied every riff and score so it took me emotionally and that I cannot help but listen frequently to this day. An album totally dedicated to the Finnish Black Metal school that had shown, in my opinion, the band to its full potential, surpassing in riffing inspiration until then. I, therefore, knew for sure what to expect from this new work, as it also was, over time, for the Sarkrista releases released prior to this one: the continuation of what had been done previously, continuing to use the same style without incurring significant upheavals.

Awareness confirmed as soon as I listened to the first seconds of the promotional single “The Beast Reborn“, very recognizable in style and sound, which could have been included in the previous full-length. While I really appreciate the song, I do not deny that, despite my expectations for this new album were very high, I would never have been able to conceive a sequel that could even get close to the majesty of Summoners Of The Serpents Wrath, which I can confirm after the repeated plays of Sworn To Profound Heresy which, before analyzing its contents, I immediately confirm that it is a really good album but far be it from me to approach it too close to its predecessor. Here we find on the cover the four disciples depicted on that of Summoners Of The Serpents Wrath: If in the previous work they were intent on evoking the Leviathan, here they seem to give themselves to the adoration of Baphomet whose figure emerges from the fire and smoke of a given church to the flames declaring themselves, as the title suggests, sworn to profound heresy. 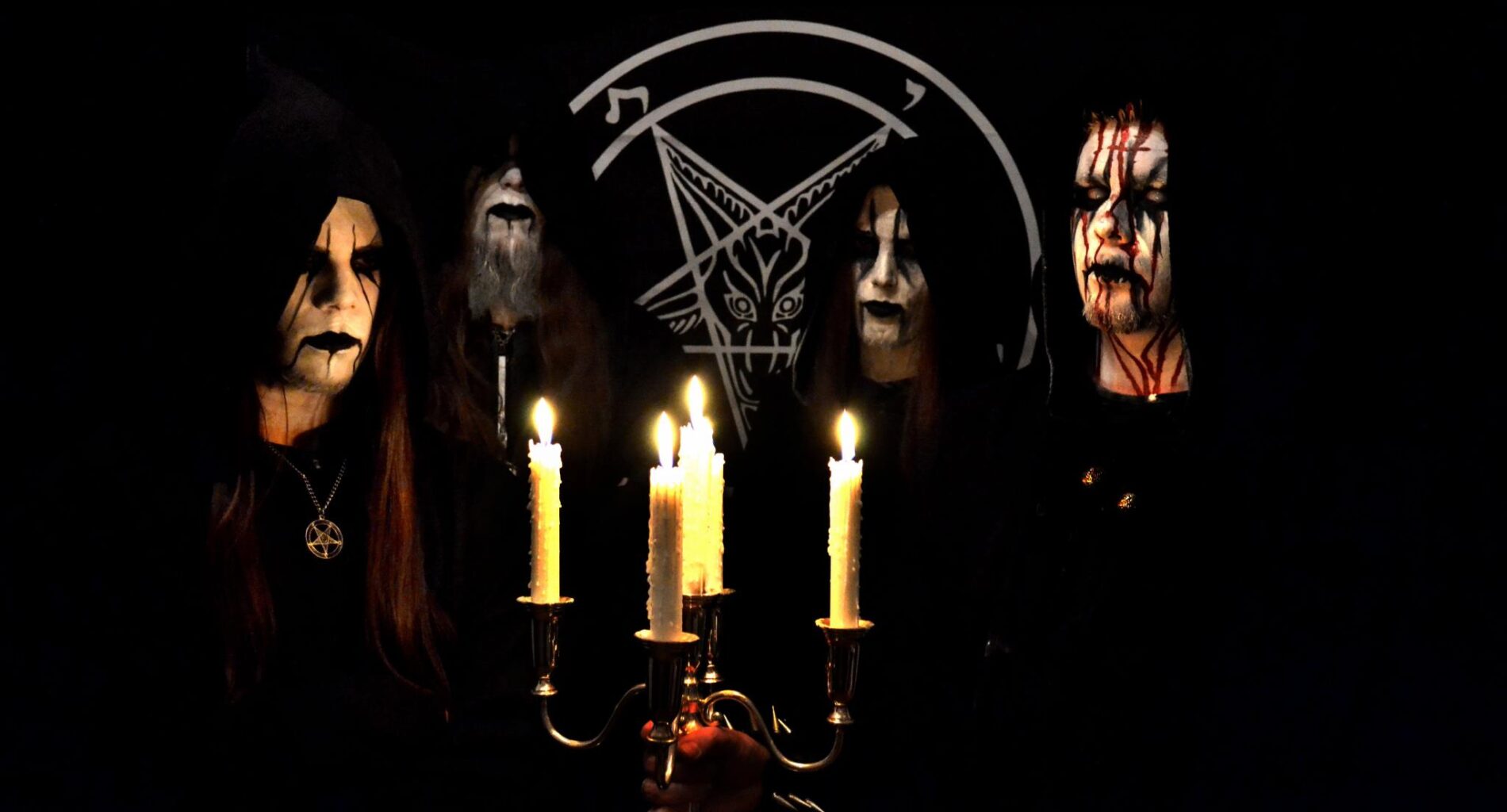 The official line-up this time only counts Revenant on vocals and guitar and Exesor on bass and drums, but also and again of guests like Birjer H. on keyboards, already present on the previous work, and the singers of bands such as Antimateria, Nocturnal Depression and Curse Upon A Prayer. The album is introduced by an interesting intro at first ceremonial and then moving towards an epic sound, I even think it is cinematic. In the end, the choir pronounces the name of the band and “Sworn To Profound Heresy” starts: The guitar weaves the first notes of one of those unmistakable two-string riffs of the band, suggesting that it explodes into a blast-beat: a predictable solution but damn effective that blasts the track into Sarkrista’s signature sound. So, shave in pure Finnish Black Metal style that invests the listener who (I speak for myself) can hardly help but intone, once assimilated, the guitar turns are so engaging. “Lair Of Cursed Remains” is adrenaline-pumping, unbridled, one of the peaks of the album. It is in the style of the previous one, with the maximum emotional charge that can only delight the avid listeners of this band like myself.

You feel the total devotion to a band such as Satanic Warmaster and Sargeist, even here it comes to intoning the riffs so much is their beauty, and this time at the top of their lungs. A piece that would ignite the stage at one of their concerts. “Ablazing Ritual Torches” differs from most of the songs composed during the past career at the hands of an initial guitar melody on the low notes and a passage composed of a scale and an arpeggio. The first riff of “The Chosen Ones Of Satan” reminds me of “Staring With Fiery Eyes” (track included in the Split Trinity Of Luciferian Illumination, which I recommend buying). The band continues here to propose the typical style between blast-beats and mid-tempos, as well as in “Conjuring The Profane Fury“. Even this song, which is very reminiscent of the solutions adopted on Summoners Of The Serpents Wrath, reminds me of another pearl included in that record: I’m talking about the masterpiece that answers in the name of “He, Who Liveth And Reigneth Forevermore” absolutely failing, however, to equal the emotional charge. “Destroyer Of The Sun” moves on melancholic arpeggios and rhythmic tempos in which notes of (what looks like a) bass peep out during the second riff. The final piano part is particularly inspired. We arrive at the aforementioned “The Beast Reborn“, the single released in preview, in which the band gives its best by moving on the usual coordinates. It is undoubtedly one of the best episodes of the lot: The riffs shine through all the devotion to Satan on the part of this band, for evil to the bone song composed of icy riffs. Right from the beginning of “A Whisper From Forgotten Coffins” it seems to hear the continuation of “Destroyer Of The Sun” since it has a similar mood. His keyboard outro, aimed at closing the album, although enjoyable and relaxing, is quite anonymous and off-topic with the song itself.

Before concluding, unfortunately, I feel like giving a demerit note both as regard the vocals (the screaming is weaker than in the past) and the drum sound. If the sounds, in general, had been more similar to those adopted in the latest releases, I might have thought of raising the vote since it would have benefited the whole work. But this is only a personal opinion. I conclude by reconfirming that I consider Sworn To Profound Heresy a more than a valid album with very high peaks, but not without defects and I cannot but recognize that there has been a certain qualitative decline in the inspiration that led to the writing of the songs. Despite this, I highly recommend it to all fans of the band. Waiting anxiously for the next release, however, I will not be able to help but listen to the pearls that this album contains. And also this time, I just have to thank Sarkrista for the music they give us.