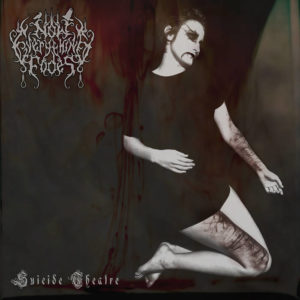 It fills you always with pleasure the fact to discover new things in music; especially when you have to dig in a pile of shit, that has become nowadays the Depressive Black Metal and suddenly you fall upon… this: Now Everything Fades, a new band formed in 2018 by a 28 y.o. musician from Jordan and an 18 y.o. American from the United States.

So, Ammar Jaber (stage name: Azmo Lozmodial, or Lord Azmo) is a 28 years old musician, keyboard player, song-writer and producer from Jordan with many interesting projects in his credits. One of them, which I strongly recommend to the fans of melodic Doom Metal is his band from Jordan named “Chalice of Doom” with two awesome albums on their repertoire; Immemorial Nightfall (2011) and Hypnagogia (2013). Both of them are real gems of melodic doom metal.

So Ammar, or Azmo Lozmodial decided to collaborate with an 18 years old American named Fernando Garcia in his new project, formed in 2018 and called Now Everything Fades.

Their debut album was released on April 13th (nice date for a DSBM album) entitled Suicide Theatre. It contains 9 tracks plus a very successful cover of Xasthur, Suicide in Dark Serenity, originally found in their 2001 demo “A Gate Through Bloodstained Mirrors” (album which I also strongly recommend to all the fans of the subgenre).

This being said let’s dig in the album itself: firstly, they fuse perfectly Depressive Black Metal with pinches of doom, distributed evenly through the compositions. The music is mainly on slow or mi-tempo, with crazy patterns of guitar progressions entwined with the keys, providing a more gloomy and dark backbone, upon which the distorted shrieks and cries of Fernando adding up value to the suicidal atmosphere giving all the anguish and pain that the album wants to communicate to the listener, while the fast parts using tremolo picking are evenly distributed through the album giving momentarily hope to the subject that’s gone immediately after. I’m not going to review this album track by track but as a whole. It can be seen as a concept album or a theatrical act passing through all stages of depression until reaching the climax where the subject puts an end to his life.

As a whole, this is a very interesting collaboration that creates its own musical signature, standing out from a multitude of bands of this subgenre that do not differentiate from each other and end up to play all the same shit.

A special mention must go to the vocal performance of this 18 years old musician whose vocal performance creates this unique Universe of cold depression and anguish. He communicates perfectly all the pain that someone feels when he reaches at his break point and wants to finish off everything abruptly and violently with no remorse or second thoughts, before he resolutely gives an end to his life.

Closing my review, I must admit that I haven’t any hope for the subgenre of DSBM, because of the existence of so many bands sounding exactly the same, making the quest for good ones almost impossible. Nevertheless, hope dies last and the feeling of discovering a band that will keep me company in the cold days of winter makes me believe that life is good… as a contradiction to the whole concept of Depressive Black Metal and this band is of course Now Everything Fades.

One final word for the production: It is dense and thick as a black forest, everything is heard, even the beautiful lyrics are understandable.

Remarkable moments of the album: “The Aesthetic Bullet”, “The Slit-Wrist Gallery” and the huge “The Pills of Salvation”.