If someone has read any of my reviews, has probably understood that I don’t care a lot for originality when it comes to Black Metal. OK, I like original bands that have something new to offer to the scene, but let’s be honest, the year is 2018 and almost everything has been played before. This small introduction is to prepare you for the next band.

Moenen of Xezbeth hailing from Belgium is consisting of 2 members, at least one of them also in Perverted Ceremony also a great band, and this is their debut.  Though they have existed as a band for only 2 years, they have caused quite a stir in the underground with their demo and their first full album. So what exactly are they offering to us? 100% unoriginal Black Metal, but with the ability to travel you back in the early 90s! 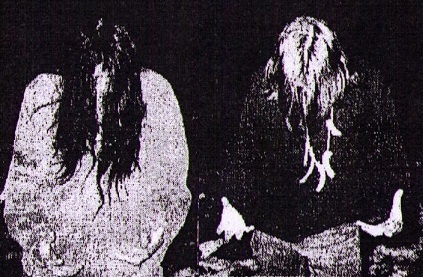 All the good old bands are here. Rotting Christ, Necromantia, Varathron, Beherit, old (very old) Behemoth and Samael! I’m writing it again to make it perfectly clear, all the above bands as they used to play back in 1990-92. “Ancient Spells Of Darkness” is the perfect sample of the early years of Occult Black Metal. Through their mid-paced to doom-like speeds and the production that gives bass and synth the vital role, you would wonder if you are in the right year.

Moenen Of Xezbeth is not a tribute band or a cheap copy of the aforementioned bands. They have assimilated 100% of their influences and have created an album that if it has been released 26 years ago, would have been a classic. Compositions are pretty simple; the synth is driving somehow the songs and gives an eerie feeling to them. Of course not like Dimmu Borgir or Gehenna, but more like Morbid used to play in Rotting Christ or Necromantia. Also, the bass sounds like Necromantia, guitars have the first role only on some leads. This thing also gives a lot of credit to the bleak and occult atmosphere, as early Black Metal have a more “bass” sound. Drumming is quite standard, as it should be, giving a ritualistic feeling throughout the whole album. Also, in the intro how they use the bell sound, reminded me of another great act, Negative Plane. Just listen “Into The Black Mist” or the same-titled song and delve yourself into that era of Black Metal!