Having just reviewed Disamara’s latest offering, I’m aware of the tidal wave of quality Black Metal blasting out of Italy and this is no less of a gem. LVA hail from the floating city, but their sound is a far cry from the Aperol-soaked, accordion-tinged strolls Northern Europeans such as myself associate with ‘La Serenissima’. The truth is, however, there has always been a dark side to Venice. Charlotte Dacre understood this when she chose it as the setting for her bloodthirsty novel Zofloya (1806) about lust, murder, and Satan. Indeed, there is something nefarious about the city’s shadowed stradas and Gothic extravagance. Getting lost in its labyrinthine streets at night is a particularly eerie experience: as the water reflects all manner of eccentric facades, your feet patter on the dark cobbles and you never know who – or what – is around the corner. And to think, when I went to Venice spent my evenings watching tacky renditions of Vivaldi and trying to find a bar that would sell me a beer after 10 pm… 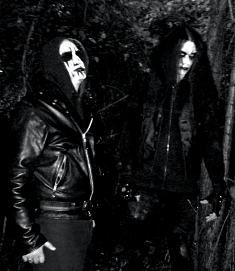 Two-man project LVA began their life in 2006 as Lua D’Inverno, initially devised as a ‘literary project’, churning out ‘melancholic’ (and presumably terrible) poetry, before evolving to produce some filthy-Raw Black Metal. 2015 saw a name change to the somewhat cryptic acronym LVA and 2017 saw the release of debut full-length Embers of a Black Plague, to (unfairly) lukewarm critical response.

Fast forward to 2020, and Ας αρχισει η τελετη (‘Let the Ritual Begin’) is their first release on Mexican label Ascension. The Hellenic title is reflected in the deep occult themes, which reference Greek mythology, grimoires and Gnosticism. The album bears some resemblance to its predecessor, mostly in the use of contrasting tempos – and by that, I mean there are essentially two tempos – savage or doomy. But Ας αρχισει η τελετη is a more subtle, sophisticated affair – and a world away from the pot and pan bashing of Lua D’Inverno. Its specialty seems to be the nightmarish, near-psychedelic guitars, which make the reader feel lost in a deranged medieval labyrinth. Instrumentalist Gavorach does a stunning job of holding it all together and Oriax Nocturna’s vocals are consistent if a little safe at times.

The opening of ‘Almadel Dodecagrammis’ sets the tone nicely for what is to come, the title referencing notorious grimoire The Lesser Key of Solomon. After a brief percussive intro, we’re thrust into a vortex of pure hellish chaos: sawing guitars and gravelly vocal howls – truly furious stuff. It winds down in a haze of icy tremolo leads, making you wonder what the Hell just possessed you. Sublime.

‘Holy Surging Fire’ drops you in at the deep end once more with another all-out attack. The savagery is served with a hint of mind-spinning delicacy as guitars bend and unsettle. They slow it down, offering torturous passages of tantalizing melody and some spectral bass work. Truly demonic and not a million miles away from DMS era Mayhem – indeed, the Norwegian classic is evoked throughout this album with church bells, a hint of monastic chanting and an all-around Catholic-Satanic atmosphere.

‘Gnosis Atlas Portal’ is a brief instrumental that opens with chest-thumping triumph. There are more of the signature leads – head scrambling, repetitive string bends. Nice cymbal work too. It’s a shame this snippet of a track became an interlude because it’s got the best damn sound on the album-whining, discordant leads above thundering double kicks. They could have done more with this.

‘The Scaled Spiral’ evokes Gothic architecture in its title and the atmosphere follows suit: thundering and brutal with a medieval twist – like being lost in a nightmare of cold, stone passageways with something dreadful in pursuit. As throughout, the guitars steal the show, with various demonic layers that make each listen seem like a fresh experience.

The penultimate track ‘Lvx Vltima Arma’ starts out dark and doomy but soon breaks into pure occult nihilism as maddening symphonic elements complement the brutality, which they somehow manage to take up a notch. A truly satanic experience that ends with some fuzzy bass work. Nocturna’s vocals really shine on this track, stepping away from the mold to truly terrorize.

‘First Last Living One’ continues in a similar vein – maddening guitars, explosive sections. But by this point, things do begin to drag a little as the contrasting tempos become somewhat predictable and the atmosphere feels a little contrived. But just as things are becoming pedestrian, it takes off. And Jesus does it take off, blasting and soaring with the occasional stark passage to retain a sense of melancholy. Progressive, touching on the avant-garde at times, this ambitious finale wraps up a premium Black Metal experience.