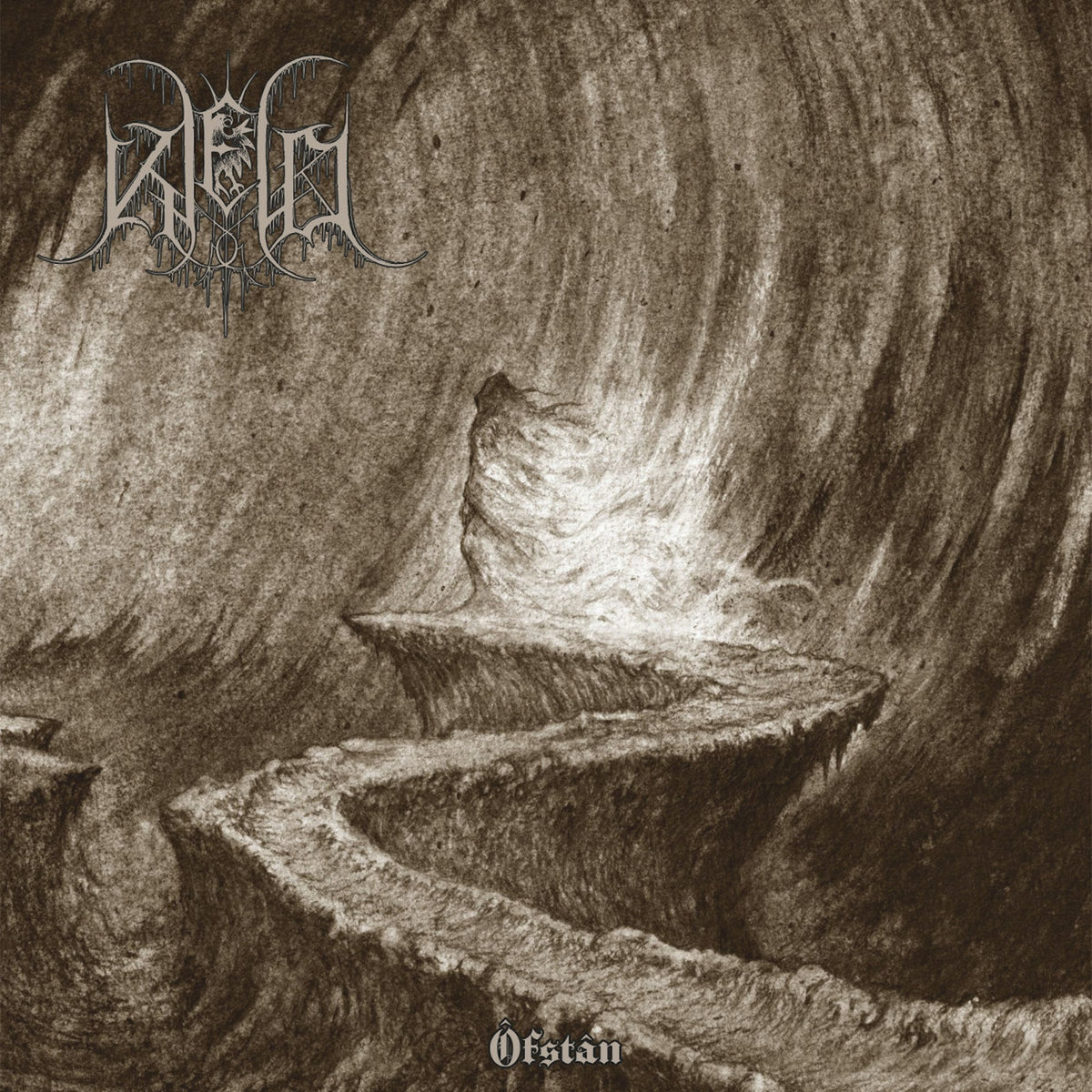 Potential confusion cleared up, we are cleared to dive into this particular Kjeld’s second full-length album, and their first since 2015. I’ll have to admit to not being familiar with this band and have had to dig into their history a little. According to one reviewer, their previous offering “Skym” was a decent, well presented and solid effort, if imperfect. Since this release, the band has released 2 split albums and an EP, so they have at least had a chance to up their game and blow us all away with their “Death, History and Mythology” themed release. So then, have they?

“Betsjoend” kicks off the album furiously with an impressively quick pace and solid, well-structured riffing straight out of the top drawer. The vocals are fairly standard fare, mid-range Blackened shrieks and howls are in good supply but after a couple of minutes, we’re treated to some deep choral moans and ethereal synth work. The track takes a darker turn and becomes suddenly a lot more interesting. Alternating between rapid-fire passages and more measured instrumental breaks, the track builds slowly up to a crescendo of fascinating songcraft. Skier (vocals) certainly has the gift of building the tension, before unleashing a series of tortured screams to close the track, while the blistering drums and mournful keys provide a suitably grim canvas to paint a really very impressive opening track. All good so far…

“De Iensume Widner” provides an opportunity for Skier to display his entire vocal range, dipping down into guttural growls in between some bouts of interesting and very talented displays of drumming. Fjildslach (drums) certainly has his work cut out throughout this short and aggressive bout of nastiness. Following quickly on its heels comes the rapier-sharp “Wylde Rixt” a convincing demonstration of bullseye-accurate songwriting. This is a serious professional and incredibly well-produced affair, as is becoming evident with the album as a whole. The guitars are as tight as a nun’s chuff and the drumming is so perfect it almost feels programmed. I would imagine there are triggers all over the place but even so, no one has the right to drum to this standard – every snare beat is identical, and the cymbal work is pretty much perfect. Think Mgła but with a healthy dose of added amphetamine. Technically brilliant and a fantastic launchpad for the title track.

I can’t quite place where this album is coming from, but the more it progresses the more I’m feeling a traditional Nordic BM vibe, of a highly polished nature – perhaps a hint of Dimmu Borgir just prior to their rock star sell-out status (i.e. EDT era). The said vibe is faint and just as you’re beginning to get a grip on the album, the required information skitters away, just out of reach. It’s a bit Nordic for a while and then it changes again and dives into Ancient Rites trad BM territory. The middle eight of “Ôfstân”, the title track, has a superb martial drumming segment aided and abetted by beautiful swelling choral synths, creating an atmosphere of undeniable beauty. The second half of the track is again another furious hurricane of wonderfully high-speed drumming and high-quality guitar work. The standout track so far.

“Asbran” kicks off the second half of the album after a much-needed half-time. Attempts at clean singing by confirmed growly BM vocalists are always good entertainment value, and here Skier does nothing to dispel the fact. He is of course helped by himself, accompanied as he is by his own howls and growls underneath his valiant attempts. All a bit Wintersun, but actually it doesn’t spoil the track in the least. It doesn’t help it, but it doesn’t spoil it. The suspiciously named “Wite Fokel” eventually gets going after an unnecessarily protracted intro and rocks along in a mid-paced collection of interesting guitar and drum arrangements, backed up by the ever-present ghostly synth. Although again technically perfect, this one feels a little forced and doesn’t seem to achieve any sort of coherent body of its own. There are flashes and good ol’ headbanging riffing but these seem to be broken within seconds by more breaks than is required. It’s a faintly frustrating listen, and I bet this is the one that you’d skip over on your iPod.  Very good, but there’s been better. 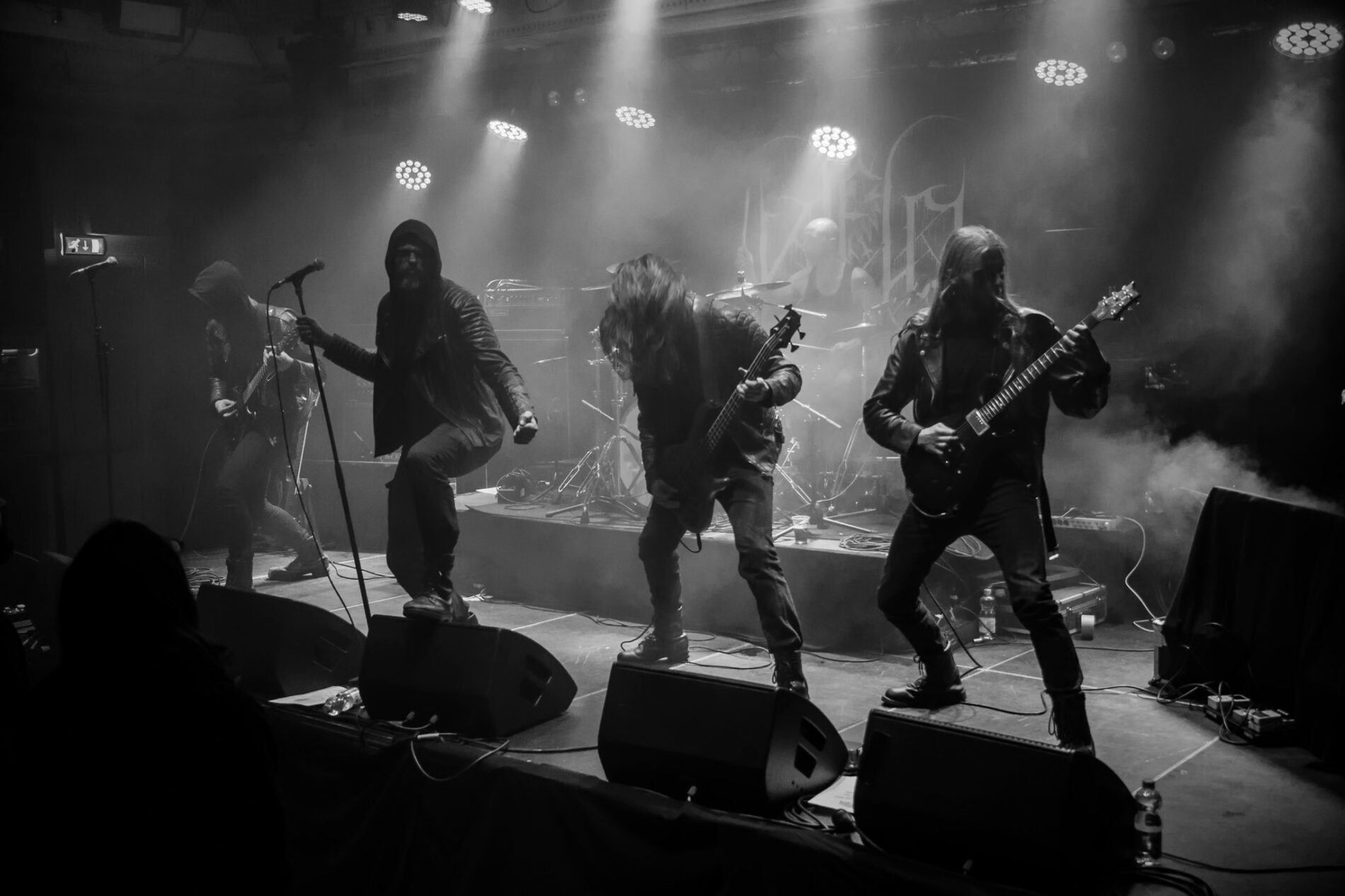 There’s always a comedy word in Dutch titles, and on this album our comedy word is provided by the wonderfully named “Falske Doop” Once again, the drummer may take a bow for turning what was becoming a fairly boring standard BM track into a much more interesting work with some very inventive filling during the verse. And just as this little flash of genius finishes so the track kicks off in ferocious fashion as it speeds up, calls in the cavalry in the form of some heavy synth work and turns the track into another eight-minute heavyweight of BM gold. Kjeld seems to be at their best in their longer tracks, where they have given themselves room to breathe and tell their stories properly. Three-minute punk-inspired blasts are all well and good, but some bands just have more to say and are better expressing themselves over a longer period. Kjeld seems to me to be very much an example. “Falske Doop” comes in at number 2. A beautiful work.

Into the home straight of the last two tracks and first up is “Skaad”, a track that follows the familiar pattern of mid-paced standard riffing that suddenly explodes into a hypersonic whirlwind.  Skier experiments here with a tortured half-clean strangled vocal passage that works very well and adds another dimension and some atmosphere to the track. And our friend Mr. Low ‘n Guttural reappears briefly for an encore. Once again that well-known Nordic BM atmosphere creeps into this track towards the end and leads nicely into “Konfrontaasje” the album closer.

Would I listen to this again? Absolutely. Would I buy it? Yeah probably -it’s certainly worthy of investigation. There are some truly epic moments here, all held together by impeccable musicianship – and that I really do mean. There’s not a single second out of place here – the professionalism on display is of the highest order. Occasionally this can render Black Metal as a little sterile, devoid of feeling and becoming basically a demonstration of how fast bands can go and how well they can handle their instruments at speed. However here, Kjeld pretty much gets away with it – their quest for musical perfection is accompanied by a real sense of dread. It’s a complicated balance to achieve and although on occasion it is a close-run thing, here I’ll give Kjeld the benefit of the doubt. This is an album that is worthy of making waves in a saturated scene – whether it will or not is open to debate.

Interview: Uada
Jeger May 29, 2022
This Is Black Metal ©All rights reserved.