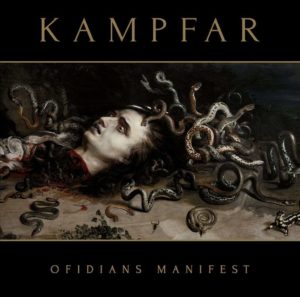 It’s been 4 years since Profan album tantalized our Black Metal taste buds and after a few single teasers, Kampfar are back with their 8th studio album and they have hit a home run with it.

Syndefall kicks this album off to a grand start with an excellently executed barrage of blast beats, darkened and vicious riffs, thick heavy drums and an onslaught of Dolk’s vocals which resemble a war cry at times, and of the most demanding nature. This is unrelenting and will make you feel a sense of nostalgia.

Ophidian is a threatening track, one that shoots right through your chest with Kampfar’s notoriously excellent stunning and intense metal sounds. The riffs are the star for creating such darkness within this number. It is a stomach-twisting feeling as Dolk’s yells turn brutal levels creating a big murky mood. Unlike the track before this one, Ophidian is delivered lyrically, in English however doesn’t lose its mysterious and convincing appeal, in-fact it does quite the opposite. Being able to decipher the content around worshiping the Serpent and a homage to Norse Mythology the feeling of ritual is bestowed heavily upon the listener.

Dominans gave an intro of a haunting famine faded sound by a guest vocalist, which was nice I guess. However, I was sold oncepropelled into an opaque heavy blackness of double kicks and harsh clean vocals that are yelled in such a way I’m sure to induce a bleed in the middle ear. The brutality of this track is what I was chasing after a softer introduction and they delivered.

Natt… After you listen to this track it should go without saying that this was a masterful journey indeed. This feels like a summoning, a conjuring, a heavy track excreting vocals to incredible levels and takes you deep into the dark. This feels ominous, corrupt in nature, amplified and dramatic. With every instrument and Dolk’s vocals ascending to a hefty and commendable platform, the track completes leaving you extremely nourished with a solid reminder as to why Kampfar are one of the greats. 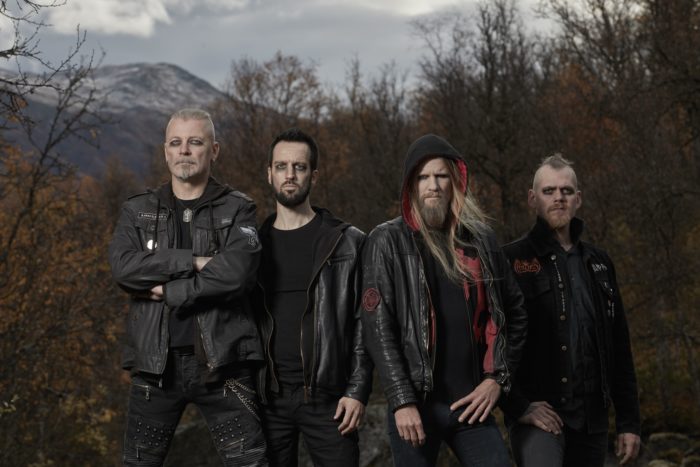 Eremitt is stained with an imposing sound yet, somewhat slightly tamer from its predecessors. Perfectly placed, after 4 no holds barred tracks it is certainly more mild in nature and sound. An Anthem track, to say the least, one that was extremely moving and Norse riddled.

A brooding wave of exceptional riffs and guitar patterns is Skamløs!. Dolk spends his time here shrieking and offering some damn dark low gutturals too. Sung once again in the Norwegian dialect, this element of Kampfar creates that of trve kvlt – if only in the sense of the foreign tongue lyrical delivery. This track will encroach on any light that might have been lingering within you and swallow it whole.

After 6 tracks of wonderfully intense and mythological Black Metal, we are smashed with the finale track; Det Sorte and what a wicked and impressive finale this is. There will be closure found in the moving element of synth and as this song kicks in to its fullest ability, we have a debut feature of the acoustic guitar. It is at this moment; you are reminded of the deep Nose undertonesof Kampfar and a strong feeling of traditional and historical themes like a fire ladled cannonball.

This album, the entire way through – had me within its grip.  This is aggressive, confronting and passionate Black Metal. Intelligent guitars, thumping and stirring drum tracks, and merciless vocals – nothing has been compromised here. This entire album is war, a battle cry, a stern hold on heritage, tradition and an ode to Norse mythology. Ofidians Manifest skites excellence in musicianship.