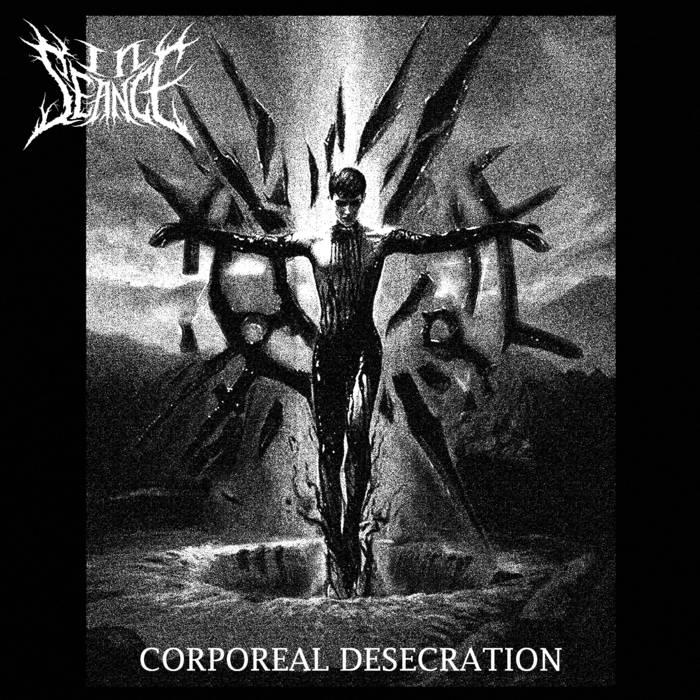 With practically nothing to be known about this band other than the fact that they hail from Portland, Oregon – what has become a mecca in a burgeoning Pacific Northwestern BM scene – and that they were hatched onto said scene a few years ago, all I do know is that their brand of what feels like Raw, Post-Hardcore-Injected Black Metal is about as unique as anything I’ve heard recently. On February 22, In Seance unshackled a bruiser of an album in their sophomore effort “Corporeal Desecration”, which was released independently.

“Corporeal Desecration” is a paradoxical album in that its production is raw and fitting of more Orthodox Black Metal recordings, yet there’s this palpable sense of urgency and even brutality felt throughout this gritty collection of tracks that resonate through an overlay of racing guitar riffs and rapid-fire blast-beats. Generally, you’ll hear music like this set to deep, punishing tones, but the bareness or absence of texture here creates an experience drenched in a certain kind of pale harshness that’s – in all honesty – a bit unnerving. But therein lies its beauty. Black metal is supposed to be rooted in coarseness of sound and crudeness in spirit. If this particular album had been recorded differently… it could possibly be mistaken for something other than Black Metal. Thankfully, more traditional album cuts like “Vampiric Bloodlust Slut” and “Adorned With Bones” serve as a reminder of just how in tune In Seance is with the scene despite the record’s blackened deathcore subtleties.

This is a very American record. There’s a lot of rhythm along with some crunchy breaks in tracks like the opener “Spectral Voice” that offer a little something for our headbangers out there. And you can feel free to strap on your high-tops and don those shredded blue jeans because “Astral Projection Failure” and the closer “The Decapitator” are pure thrash-driven beauties that unfold with some of those classic, racing guitar progressions following ruthless blast-induced bludgeonings.

There’s something genuinely artistic about raw production. If it’s done right, it not only exposes each phase to where there’s nothing lost in the mix, but it provides a more intimate musical experience. It’s basically the band baring their musical soul to the listener. With “Corporeal Desecration”, In Seance take a risk by utilizing this particular production technique for such an intense album, but they definitely pull it off. And with literally no other bands to compare them to, you can just expect to take in something wholly unique, yet deadly as a sledgehammer blow to the forehead.