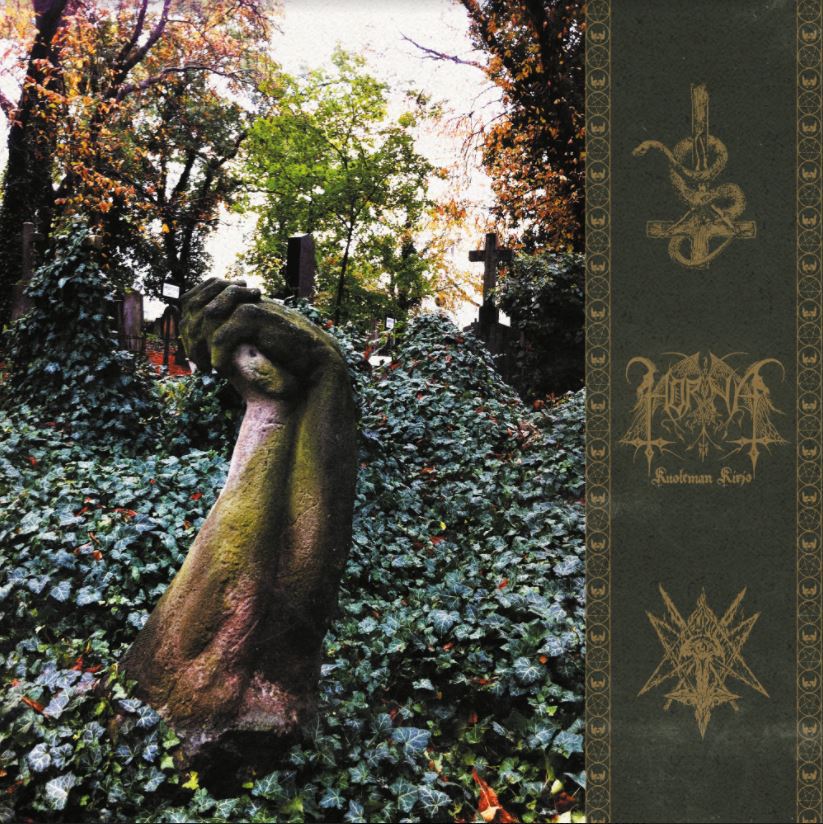 When you speak about Horna my eyes get inflamed and I get goosebumps: one of the bands that I have listened to the most since I was a teenager and that I have never stopped listening, having been able to give birth between my riffs and my favorite songs ever. This whirlwind of emotions, however, only catches me if we talk about the origins of the band up to the year 2009, the date of the release of the excellent split with Nefarious, given that from subsequent releases Horna considerably changed their musical proposal, which honestly I did not appreciate almost at all. So, for me, about ten years of little inspiration and emotional charge along with all the releases of that period, of which I save very little (ditto for the two albums Askel lähempänä Saatanaa and Hengen Tulet), up to the year 2020 with the tenth full-length treated here Kuoleman Kirjio (trd: The Spectrum Of Death): 13 new songs composed entirely by guitarists Shatraug and Infection, for a total of over an hour of music. In the end, the line-up sees Spellgoth on vocals as usual, his brother LRH on drums and VnoM on bass (the latter two for the first time on a full-length by the band).

“… classic in a most ’90s manner. In fact, one could compare Kuoleman Kirjo to early Horna touchstones as Kohti yhdeksän nousua and especially Haudankylmyyden mailla, but in a more streamlined form …”. 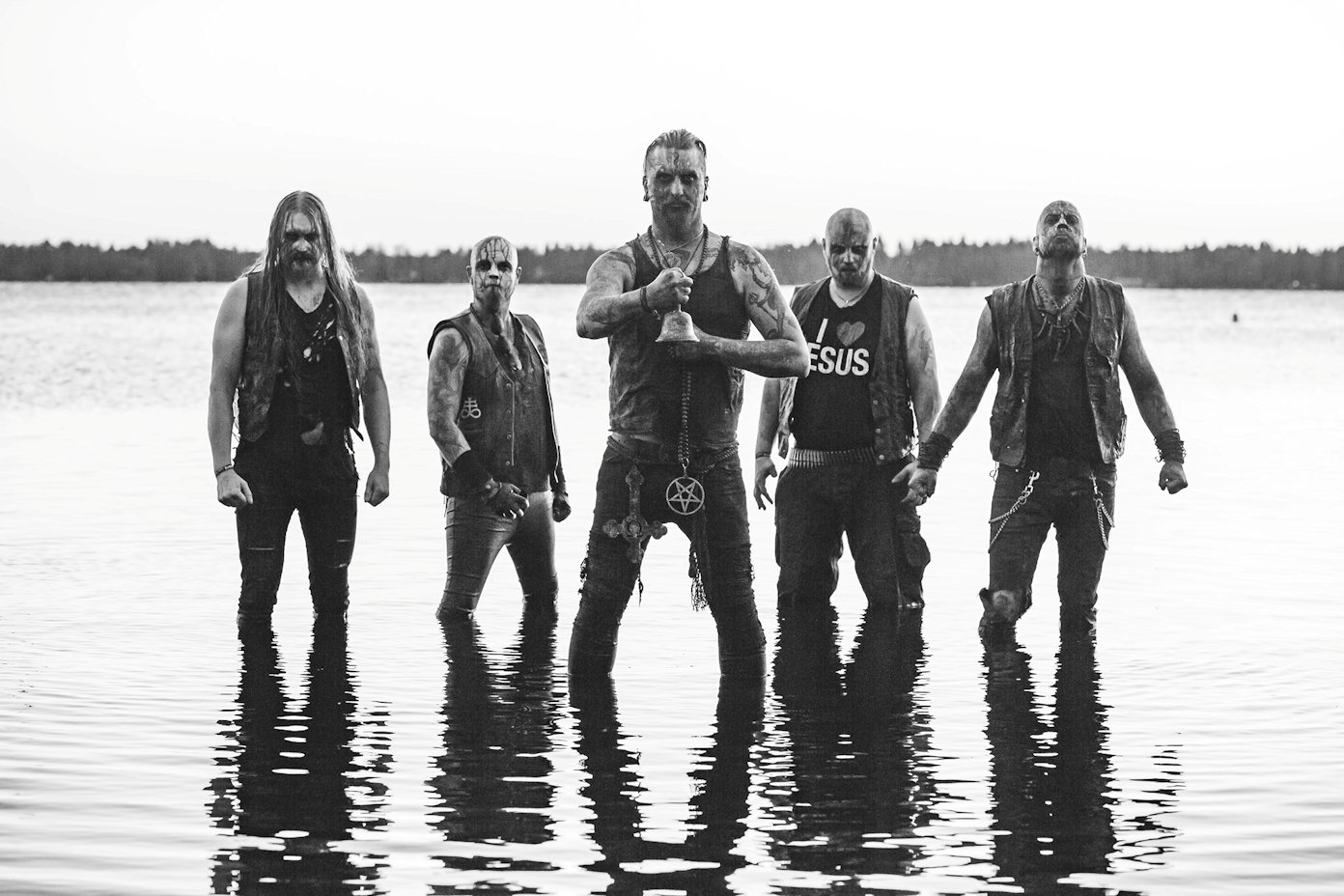 This, a part of the statements of the band about the new work, which reassured me only in part, since I consider Haudankylmyyden Mailla one of the least successful episodes of the band (the same frontman Shatraug declared in an interview that the period of the composition of that album had been the result of a bad period for Horna). But listening to the songs, certain scores immediately reminded me of another masterpiece of the band: I’m talking about Sudentaival, a real blowout of album with its frenetic and heavy riffs and its drum shots. This, of course, only scores points for this new job. Just “Saatanan Viha” (trd: The Wrath Of Satan), the single released as a preview of the album starts, you are hit by its sinister overlapping melodies, to move on to a headbanging riff that seems to have come out of Sudentaival: a solution that we also find in the following “Elegia”, “Elävänä, Kuolleena” “Sydänkuoro” and “Ota Minut Vastaan”. I was immediately pleased to see how Spellgoth’s voice was better adapted to Horna’s music and, although it was very effective this time, this was the best solution to do justice to the songs on the album. This opener will delight early Horna admirers, but the pleasant surprises didn’t end with “Elegia” (trd: Elegy) featuring early Horna melodies and the enthralling “Uneton” (trd: Sleepless), my favorite track, which unleashes a first riff among the best ever composed by the band. “Sydänkuoro” (trd: Heart Chorus) is gorgeous in its mid-tempo and evocative in its clean vocals. Also excellent is “Elävänä, Kuolleena” (trd: Alive, Dead) with its meandering riff and its Sudentaival riff that reminds me of “Noidanloitsu”, a pearl included in that album.

“Kärsimysten Katedraali” (trd: Cathedral of Suffering) and “Haudattujen Tähtien Yönä” (trd: On the night of the buried stars) are among the other episodes that I prefer: the first, whose main riff winks at that of De Mysteriis Dom Sathanas of the never too honored Mayhem, among other things, for its intelligent drums solutions and the second for its epicness, which at the beginning reminded me of Horna’s dated song “A Ring To Rule”, which I recommend everyone to go and rediscover. Again, the clean vocals are used well and the arpeggios are well constructed.

Also of excellent workmanship are “Rakas Kuu” (trd: Beloved Moon), “Unohtumaton” (trd: Unforgettable) and “Mustat Vuodet” (trd: Black Years), which unleash malevolent melodies that take us back to the beginnings of the band. After the equally good “Pyhä kuolema” (trd: Holy Death) and “Veriuhri” (trd: Blood Sacrifice) comes another highlight which stands in the name of “Ota Minut Vastaan” (trd: Receive Me): the clean vocals here are the masters creating an incredible ceremonial pathos always moving on solutions that Horna adopted at the beginning revealing, also in this case, well-chosen melodies that remain etched in the mind of the listener. Kuoleman Kirjo is a multi-faceted album that is appreciated more and more with each listening: never before has Horna proposed a Black Metal of such compositional articulation which makes itself felt strong throughout all the songs, which is not easy to propose, given the substantial amount of material proposed here. Their most mature work so far without a doubt, which any such listener should do their own. I just have to wait for his successor, hoping that, this time, ours will draw inspiration from albums such as Envaatnags Eflos Solf Esgantaavne and Sanojesi Äärelle, which I consider their cornerstones for my tastes. In the meantime, I will gladly settle for the excellent work that is Kuoleman Kirjo.