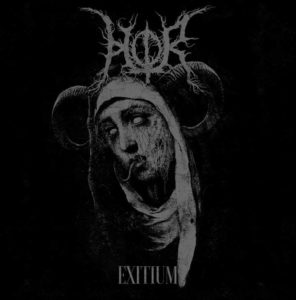 It’s been quite a long time for me since my last review, due to work and other things that occurred. To be honest, I don’t know if this would be my last review or occasionally might be some installments.  We’ll see. Enough about me, let’s see what we have here.

Hor is a new band from Greece, that consists of two members, Ophion (guitars) and Throne (bass&vocals), with the help of a session member on drums. Though they exist 2 years, both members have a significant background at the scene, despite the fact that this is their first official release. And due to their love for traditional and uncompromising BM, they offer us with “Exitium” a somewhat nostalgic album.

“Exitium” consists of 4 songs with total length 34min. Each song is quite simple in form, with 3-4 riffs. This album is homage to the Norwegian 1993-95 era! Here you’ll hear mid to fast tempos throughout the songs and riffing alike old Taake and Darkthrone. The sound is very clean but not well polished, letting the listener hear the slightest detail and very good drumming, steady without unnecessary fillings.

After the small intro, comes “Birth Of Tragedy”, the very first track. The simplicity of the initial riff brings me on mind VON, but under a “Norwegian” prism. I must notice that vocals are great! They have used the right amount of reverb, making them sound ultra-torturous! As the opening track evolves, you might face some old Naer Mataron influences, especially at the use of the reciting vocals. The second song, is the best in my opinion, mid tempo speeds mostly, with great riffing nice atmosphere and melody. The end of the song with the lead guitar riffs is something.

Then comes the thirdsong (Time), which I think is the weakest one on this album. Generic riffing of it, till fortunately, the half. At this moment you’ll meet Darkthrone Black-Thrash riffing that manages to save the rest of the song! The last song, the same titled, is divided in two parts. The first one is mid tempo epic which erupts to a furious blast till the end!  Repetition adds more intensity to the song and I really like the tympani sounds. If you have heard Keep Of Kalessin’s “Agnen”albumyou ‘ll get it.

The only thing that I didn’t like was the front cover. It reminds me Sixx’s“Sister Devil”  but the problem is not this, it’s too “digital” for my taste. Apart this and the half third song, “Exitium” is an honest album of nostalgic, true BM, without any surprises, well made and with the right sound. Also, it will be released on vinyl from the French Sanit Mils Records and on CD from the Greek label Metal Throne Records.