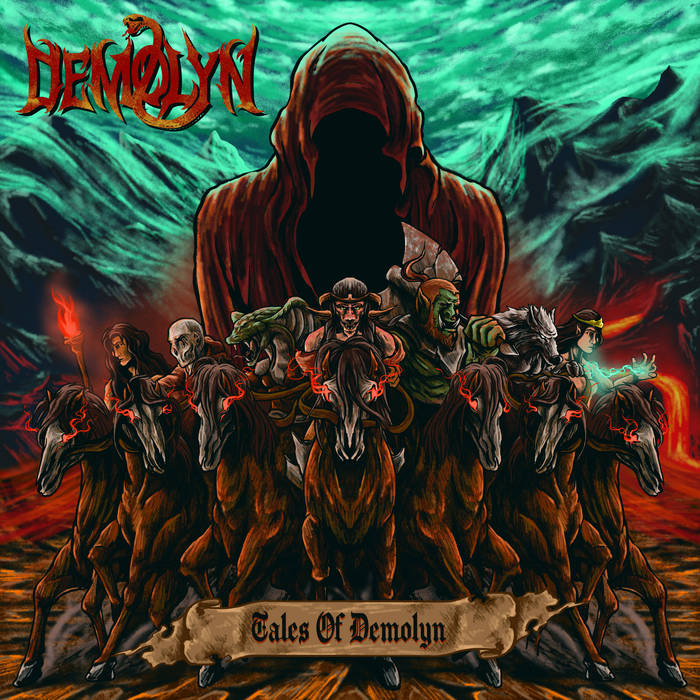 Sweden’s Demolyn is a mysterious project that literally came out of nowhere with its debut full-length studio LP, “Tales of Demolyn”, last month. With underground labels literally pumping out new material from striving solo artists every week, it’s next to impossible to really make an impact unless you’re bringing something truly innovative or irresistibly classic to the table.

With “Tales of Demolyn”, our nameless mastermind has chosen to emulate the Immortal blueprint to the crafting of black metal as he snatches you from the drabness of your day-to-day into the realm of storytelling. Naturally, I expected an epic experience; one where the music and the concept unfold into a wholesome tapestry of true Swedish Melodic Black Metal.

As The Seven Riders of Demolyn sweep the countryside doing whatever it is they do, they flash a fancy, but ultimately less-than-lethal cache of weaponry. Tracks like “The Shattering Soul” and “Withering Away” – though adept – just feel stitched together and one-dimensional.

There’s a hollowness to the record that begs to be filled with more harmony and melody. There are some fine atmospheric components that surface from time to time throughout the recording in the form of gentle acoustic guitar arrangements, eerie keyboard droning, sinister spoken-word vocals, and the sound of thunder, or the galloping of horses, but they’re few and far between. “Döden Jag Är” and “Per Sanguinem Effuderit” offer prime examples of this approach that should’ve definitely been expanded upon.

Our journey through Demolyn culminates with “The Seven Riders of Demolyn”. Another disjointed cut with a dull drum track that just feels like the sonic equivalent to a Spaghetti Western as opposed to the real John Wayne experience. This western vibe is present throughout much of the recording and I can’t help but be reminded of bands like Watain and Vreid as both have been known to tread the same rugged artistic territories, but with more genuineness and a better feel for the terrain.

There’s something to be said about this mystery man’s talent. That’s definitely not missing from “Tales of Demolyn”. As I mentioned before, everything just feels bolted together and a bit awkward or even rushed. The eagerness in anticipation of every passage, the fluid transition from one part to the next keeping you locked in as the melodies soar and the percussive cadences drill every composition home within an atmosphere aglow with magick and the fire of battle! Not quite, but the spirit is there nonetheless. Mediocrity is a starting point for some and is often the catalyst to greater things for projects like Demolyn. I think more patience; perhaps a demo would’ve whetted the blade for a better debut album. I’m not entirely sure what’s happening in Demolyn, but if it’s anything like what’s going down in Blashyrkh then the soundtrack needs to be more epic!

I imagine our horsemen just kind of trotting along here when they should be hot on the scourge in desperate search of the next battle, the next soul to steal or plague to spread… All as the sweet sound of pure Swedish Black Metal fills the dusty air… Maybe next time.

Interview: A Forest of Stars
This Is Black Metal ©All rights reserved.