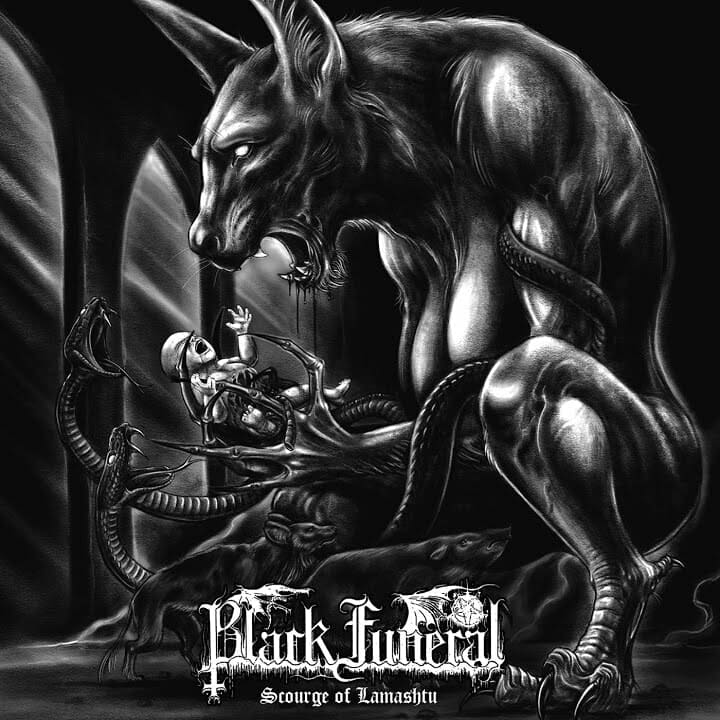 “Black Funeral opens ancient, sand-worn tombs and reconstructs the rituals of kassaptu (sorcery, black magic), demonology and vampyrism of the Neo-Assyrian, Neo-Babylonian and the Ur III (Sumerian) periods of Mesopotamia. The entirety of this recording is centered around malefic demons, rebel deities and the vampyric ghosts which still haunt this world. Incantations and spells translated from 8th Century B.C.E. Akkadian compose the core of lyrics. The Seven Udug-hul (utukku) Demons and rebel gods are structured in incantations of seven names, interconnected with Lamashtu, Lilith and the malicious types of Udug-hul (translating “evil”, “hul” is also formerly spelled as “xul”) demons whose number is legion and drinks the blood (and souls) of human Prey”.

So says the foreword is written on the first page of the booklet: essential information to fully understand this work. Now in its tenth studio album, Michael Ford’s creature (aka Akhtya Nachtotter) still makes use of the presence of Azgorh Drakenhopf (mastermind of established projects such as Drowning The Light and Eternum) as regards the recording of guitar, bass and keyboards and the unknown An Unnamed Spirit for those of drums, a line-up already consolidated in the previous Ankou And The Death Fire, from which Scourge Of Lamashtu takes up the sounds and riffs both melodic and melancholic and more evil: Azgorh’s hand on guitar is clearly heard, which made both this and Black Funeral’s previous work two albums more in the style of Drowning The Light, in my opinion.

Which can only be a good thing from the writer, being a huge fan of the aforementioned Azgorh project. Therefore, 7 hymns for 7 spells that deal with demons, rebel gods and their deeds, focusing in particular on Lamashtu, a female hybrid creature of a Sumerian demon who was believed to snatch the unborn from mothers while they were nursed, sucking their bones and drinking them blood, well represented in a macabre way on the cover. The Middle-Eastern beginnings of “Kassaptu Lemuttu”, “Seven Udug-Hul”, “Scourge of Lamashtu” and “Pazuzu, King of the Lilu-Demons”, in which the keyboards of Azgorh are made even more disturbing by the Dark Ambient effects composed by Akhtya Nachtotter.

I would like to point out the aforementioned title track and “Pazuzu, King of the Lilu-Demons” among the best of the lot, but personally, the podium is won by “Gidim-Hul, Bloodthirst of the Demonic dead”, in which guitars and organ blend well to giving life to a masterpiece of melancholy, definitely one of the best songs conceived by the band (not for nothing, very much on the style of Drowning The Light in its proceed). Akhtya Nachtotter through the texts tells us precisely of demonic figures and tragic events of ancient Mesopotamia, demonstrating his rich knowledge about the topics covered (for the uninitiated, he is the author of several books on demonology).

In conclusion, undoubtedly one of the best works of Black Funeral and if you have appreciated the previous work, you can not help but be satisfied with this as well.