A massive comeback from the duet, which developed and pioneered the underground scene back in the day.

Jim AKA Mutilator was the first bassist and a founding member of the Greek Black Metal band Rotting Christ.

He was also the first bassist in Varathron. He appears on both Rotting Christ’s Thy Mighty Contract and Varathron’s His Majesty at the Swamp, two of Hellenic Black Metal’s most recognised and defining albums.

He also participated in the most important Black Metal tour back in the day, which included Blasphemy, Immortal and Rotting Christ. He left Varathron in 1993, shortly after their full-length debut.

He did two more albums with Rotting Christ, Non Serviam and Triarchy of the Lost Lovers before leaving in 1996. However, he contributed lyrics to Rotting Christ all the way up until the Sleep of the Angels album.

In 1985, at the age of 14, he started a band called Black Church with the Tolis brothers. Two years later the trio went on to form Rotting Christ. George AKA Magus Wampyr Daoloth , The Magus or Morbid is a Greek musician and producer, mostly known for his work in the Greek Black and Death Metal scenes.

He’s mostly known for his collaboration with bands such as Necromantia, Rotting Christ, Thou Art Lord and many more. He is credited for shaping the ”Hellenic sound” of Black & Death metal.

George Emmanuel, owner of Pentagram studios adds his talent with a 6-string majestic performance and his experience as an ex-member of Rotting Christ. Fasten your seatbelts, the time has come, prepare yourself for the purest of Metal, the darkest of Magic and a hell of our Freedom.

This Is Black Metal Webzine talks with Jim from Yoth Iria about the past, the present and the future…

This Is Black Metal: Hello Jim and thanks for being with us! How are you during these strange times?

Jim Mutilator: Actually I had plenty of time to concentrate on my music and my books.

To be honest it was not so difficult for me as like a person I’m quite antisocial so it did not change a lot of my daily way of life.

TIBM: After one EP and a Split with Kawir, you released your debut album “As the Flame Withers” with great reviews. What is the reaction from the fans so far to your debut album?

Jim Mutilator: I’m really satisfied with the reaction to my new album. Especially for a new band, I’m more satisfied than I expected.

Of course, there are some people who expected from me something like my Rotting Christ dates, which means they expected me to release a second Thy Mighty Contract or Non Serviam but it did not happen as those albums happened once upon a time.

But to be honest we must accept all kinds of reactions.

In fact, for me, Black Metal is not so much a kind of music. It’s a kind of life and I am following it all my entire life and it would be gone till death do us part. 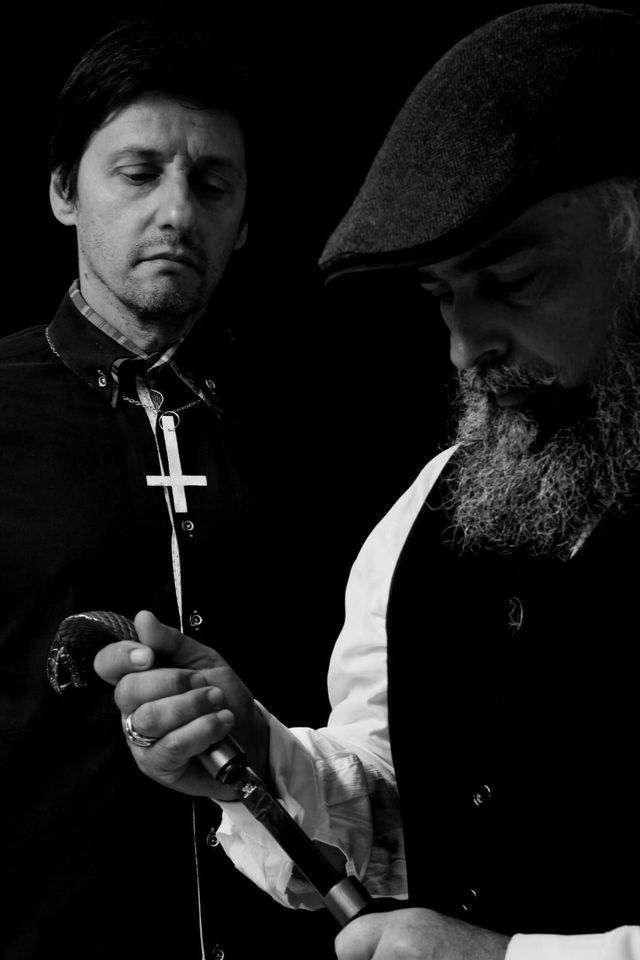 TIBM: You made a video clip for The Great Hunter, why did you choose this song?

Jim Mutilator: I think it is an aggressive track totally to the face. Also, it’s our shorter album track.

TIBM: Something that I really enjoyed on the album is the overall music/sound of it; I can see old-school elements combined with modern, which makes an amazing result. I would like you to tell us about its production and creation.

Jim Mutilator: I started preparing the tracks (at least most of them) in the late 2000ies.

As you can understand Under His Sway and As the flame withers is a job of 10 years and more.

Its also a reality that the basic ideas are ready for one more album. It means I’ve already done 9 more tracks.

The production, of course, took place in Pentagram studios of George Emmanuel (Lucifers Child, ex-Rotting Christ) and we spent about 1 year and a half finishing up the album.

I must say that most of the time it was me and George working together.

Of course, later The Magus joined us and we put the final details altogether.

TIBM: We are living through a materialistic age that “fast food” dominates every aspect of our life, even in music. Reading the lyrics I received a feeling of romanticism and spiritual internalism, something really rare these days. How important and safe is it for a musician, to show the depths of his soul today via his work?

Jim Mutilator: You are totally right. My beliefs id exactly what were back in my Rotting Christ days.

Just nowadays I’m a man without anger, without hate. I have a dream about a new world. A world full of knowledge, freedom, equality and light.

I m writing in my lyrics about this vision about the new kind of human beings I’m expecting. I have it in my mind like a man of light I call it Luciferian man.

Really I want a new world order. So far their system, their religions, and their policies totally failed. They are just to serve a sick elite.

I sing about lucifer, and his demons as they are the true friends of humanity and mother earth.

TIBM: The song that stood out for me both musical and lyrical is Hermetic Code. Especially the lyrics are outstanding. Considering the fact that you were always writing lyrics, which are your lyrical influences? Do you have any favourite philosopher/poet?

Jim Mutilator: As you can see from my previous answer I’m the kind of person that loves freedom and knowledge. I believe in equality and respect for everything.

Of course, I m studying occultism all my life and I will have my own book released later this year. It’s a book about magic as a daily way of life that helps man improve himself. A book that unguilty magic and occultism. I believe that if each of us works with our inner self and improved as a person we will create a better community. This improved man is what I call Luciferian man.

Further in our lyrics, you can find references to ancient gods and ancient cultures and civilizations.

TIBM: I would like to tell us about the concept of the imposing album cover and its creator.

Jim Mutilator: The artist behind our covers, ep and the full album, is the Indian artist Harshanand Singh. He is known mostly as a designer for Ubisoft.

Our concept is about Yoth Iria. Yoth Iria is the rays Lucifer the first, Satan the second and Devil the third sent to the earth to help and give courage to the simple people and help mother earth to survive. After Yoth Iria came in the earth took shape and form.

My main idea is that Yoth Iria will be in every upcoming album of us. Like Eddie of Iron Maiden.

TIBM: You have not played with Magus for so many years, what changes occurred that led to that music reconnection?

Jim Mutilator: I was nearly to finish the album and I was out of a singer. I was talking with a lot of vocalists from all over the world but the distance was a problem.

It was Dayal Patterson (the author of Non Serviam book among others), who told me about The Magus.

After I phoned The Magus was totally negative. Finally, he was persuaded to receive my demo just for a hearing.

After 2 hours he called me back and told me… “oh Jim is amazing, I want to be with you to this”.

TIBM: You are having George Emmanuel as a guest, who was also in Rotting Christ. Can we say that this band is like a big family?

Yoth Iria is a big family and all of us enjoy working together.

TIBM: After so many years, how do you see today’s Greek Black Metal?

Jim Mutilator: It has improved a lot and I’m very happy to see there are a lot of bands creating great music. In my opinion, the Greek Black Metal scene is one of the best all over the world and I suggest your readers have a look here. 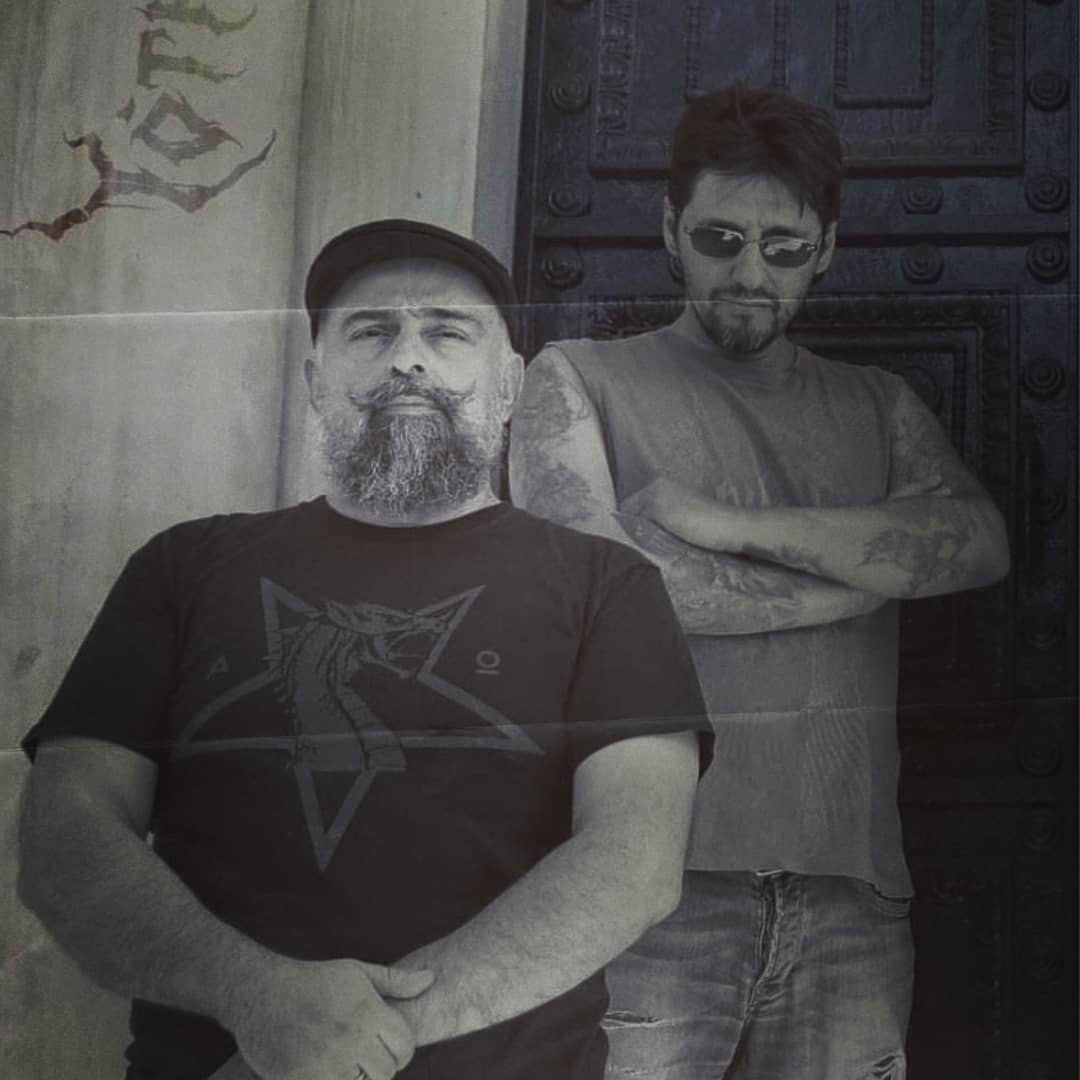 TIBM: Is there any early Greek Black Metal era band that you believe should be more successful?

Jim Mutilator: I think that all the old Greek Black Metal bands have a good reputation all the world. Of course, there is Rotting Christ overall but then there are such great bands with good fame like Varathron, Necromantia, Thou Art Lord, Kawir, Zemial, Agatus etc.

TIBM: As we mentioned before, you were in Rotting Christ for many years… What is your favourite album and song you created with them?

Jim Mutilator: Rotting Christ is my second home. Even though I left back in 1996 I always feel I belong there. It’s very hard to choose my best album and tracks but with a gun in my head, I go For Triarchy of the Lost Lovers. Concerning single songs let’s say King Of a Stellar War, Snowing Still, Fgmenth thy Gift, Non Serviam, Among two Storms, Forest of Ngai, Feast of the Grand Whore and Visions of the Dead Lovers.

TIBM: What advice would you give to someone, in order to make a successful band today?

TIBM: Can you share with us your future plans?

Jim Mutilator: I want to tour the world with my new band Yoth Iria and meet a lot of people that support us and love our music.

TIBM: Ok Jim, I would like to thank you for this interview, it’s been an honour! The last words are yours!

Jim Mutilator: Thanks so much for your interest in us and the great interview.

Thanks also to all the people who will read this