Wolves Den are a German Black Metal Band. This Is Black Metal Webzine had a talk with Mexx, guitarist and main composer of Wolves Den about all the things you want to know about this project.

Mexx: Hi! It was Helge and me that gave birth to Wolves Den, I guess that was around 2012-2013. We’ve known each other for years, and we belong to the same generation of Metal musicians in the area around Munich. We’ve both already played in lots of bands around here; One of the main ideas behind this new Band was to take all the experiences that we both had collected and put them into something completely new, trying to avoid all the mistakes we made in other bands in the past. So we decided to make a cut in our lives, we both got rid of some of the hooks holding us back, we moved together and we formed Wolves Den.

TIBM: Your debut album “Deus Vult”, had very good reviews…How did it feel? Did it meet your expectations?

Mexx: Of course it feels nice if you get good reviews. But first of all we ourselves have to be confident with the Album! We don’t care much about what other people think. I personally didn’t expect to get so many positive reviews – so no, it didn’t meet my expectations!

TIBM: What is the process of composing and songwriting?

Mexx: I will go more for the technical aspects here. I have a little project studio in my flat. The heart is my Axe FX which I use both for live and for recording. This makes the whole process very comfortable, as you already start with a cool guitarsound from the beginning. So when I have a basic vision of a Song in my mind – I start with composing/recording the Guitars, then I add same Midi-Drums and maybe some simple Synthies. I prefer to work with Cubase. Once I am satisfied with this first version I hand the stuff over to Manu who works on the Drums. He also has his own recording Studio, so he can already hand me back “real” Drumtracks which I use to continue. In parallel Helge writes the lyrics – so everyone has his Part.

TIBM: Where do you get your inspiration from?

Mexx: Always from the right moods! It is never like: “ah I had a good day, the sun is shining, now lets go home and write some obscure guitar riffs!” For me, the Songs are always a reflection of the current inner self. When I wrote the main Riff for “Mortis” for example, I had recently seen someone dying, when writing “VobisCum” I was quite aggressive ..(and a little bit drunk);  I guess you can hear these Emotions. I know that some bands simply write tons of riffs, then go to the studio and put them in a certain sequence and call these songs. And in the end you can exchange the Riffs between the tracks like Lego Stones; That wouldn’t work with a Wolves Den Song.

TIBM: You’re currently working on a new album…what can you tell us about it? What themes will be mentioned on it?

Mexx: The Music is almost finished, or lets say in a very progressed state. There are 7-8 Songs that I find good enough to be published. No it goes into the little details..this will still take some time as we are very perfectionistic. I cant say much about the Themes, this is Helges domain. I am also not a big fan of talking about the Themes and topics; Good Lyrics work on different levels and everybody can interprete them in his own way. When it comes to the Music I think that the new Album will be more homogenic compared to deusvult. When we started Wolves Den we where not 100% sure about our style, so the songs where a bit divergent. But we still follow the road that we did on deusVult. There wont be any big surprises. It was never our goal to reinvent this stile of Music, we just do what we like. That means basically playing the kind of music we grew up with.. 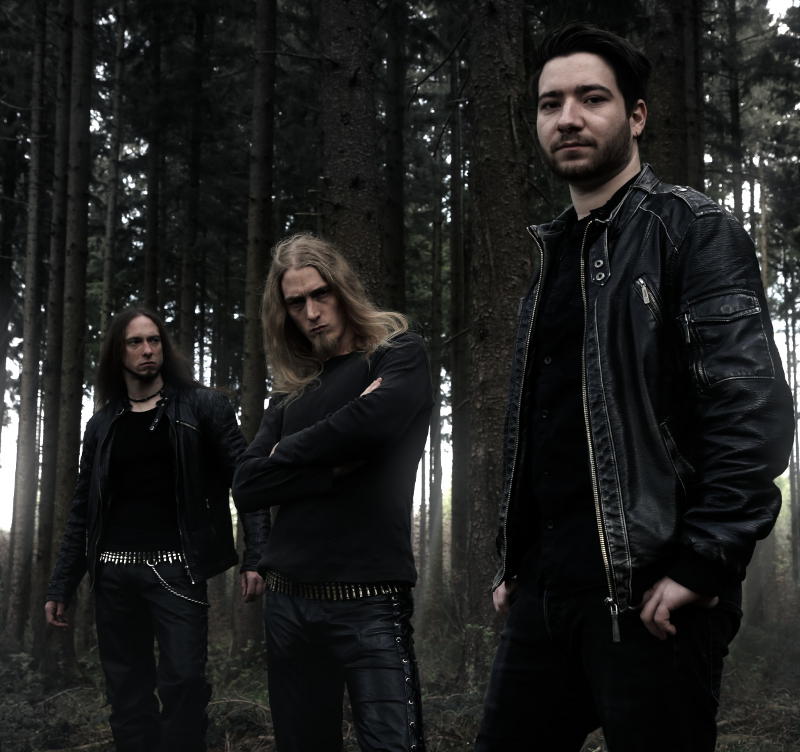 TIBM: Do you feel pressure on the new album after the success of your debut?

Mexx: If I take a look at how many Copies we have sold so far it is a bit daring to talk about “success”, haha! But I always have the pressure that I put on myself, I really don’t want to put out crap. I don’t care so much about what the “reviews” will say. As long as I (or we as the Band) are satisfied with our stuff it doesn’t count what other people think. We all have jobs beside the Music so we don’t have to rely on how many copies we sell, that gives us the freedom to ignore this whole business crap.

TIBM: What do you feel about the evolution of  Black Metal since its beginning until now?

Mexx: I was born in Germany in the Beginning of the 80s. Unfortunately I cant find the keys to my Delorean , I cant go back to Scandinavia in the early 90s to check out how it was back then in the glory days!

Like many people in the scene today I basically have an outsider view.  So I just give my personal impressions: The first time I ever heard about the term “Black Metal was in the early 90s when we had this infamous “satanic Black Metal murder” in Germany, the newspapers where full of it. And in my infant brain this association was set: Black Metal = evil. And that was also what attracted me in the beginning when I began to discover this kind of Music as a Teenager. Back then I was always looking for extremes.

But of course society has its own mechanisms to change a movement that is too subversive… Nowadays for many people “Black Metal” seems to be nothing more than just another harmless genre for hippsters.  We had a concert in Munich some weeks ago that was titled “Black Metal against homophobia” or something like that. I mean this is just something else. Don’t get me wrong: You can play whatever Music you want and choose whatever topics you want. But don’t call that Black Metal if it is something else! People might say: This genre has evolved. Others might say it has degenerated. Maybe that’s the same..

I already mentioned that a few times in the past: I also don’t consider Wolves Den to be a real Black Metal band either. We are a Metal Band in the first place and the main influences are Death and Black metal. Call it Black Death Metal if you like.

TIBM: What can you tell us about the Black Metal scene in Germany?

Mexx: The scene here is not homogenous, people in different areas have very different ways of approaching this kind of music. There  is nothing like “the scene” I think. Its more like different groups of people that all think that the other group is untrue.

A bit special about Germany is that some people try to bring their politics into this Music. That sucks a lot. If I talk to Metalheads from other areas – Scandinavia for example I always get the impression that this a kind of specific German Problem.

TIBM: You played at Ragnarok Festival in April, how was it?

Mexx: Ragnarök was nice. We had to play as opening act, but surprisingly the area was already quite crowded when we started. And the people seemed to like it. We also had a very nice after show party… meeting old friends and many drinks. Rotting Christ also played at Ragnarök so we also had the opportunity to meet some our personal heroes.

TIBM: What can your fans, who haven’t seen you live yet, expect from your live performance?

Mexx: An old school Metal show. It has become some kind of trend that people are hiding their faces behind masks and hoods when playing live. We prefer head banging. And Helge is a real freak when it comes to building show elements for the stage – he has built our own little midi-triggered light show and fog machines, all self made. We had a big focus on the live shows from the beginning – Check it out.

TIBM: Do you want to leave a message for our readers?

TIBM: Thank you very much for your time

Mexx: Thank you too!