Warhammer is a Black/Death metal band from Athens, Greece. They started as a Thrash metal project in 2012.

In November 2012 they released the first demo which is called ‘’Warhammer’’. In 2013, the band had a stable lineup and in November of 2013 released its first full-length album entitled Mass Burial (the album was released by Senseless Life Records). They also played their first gigs in Athens.

Since 2014, the band has toured 3 times (a Balkan Tour in 2015, a European Tour in 2016 and a Latin American Tour in 2019) with more than 30 shows and festival appearances abroad and has released their second album “At the Threshold of Eternity” via Sliptrick Records.

In 2017, the band organized “Serbia Metal Meeting”, a metal festival in Nis (Serbia) in which there were bands from Greece, Bulgaria, Romania, Serbia and Croatia with positive critical acclaim in the Balkans.

In December 2019 the band re-released the first album ‘’Mass Burial’’ and started working on the upcoming 3rd album. The band had announced a tour in Asia and Oceania for September 2020, but due to the Covid 19 pandemic, it was postponed. At the moment, Warhammer has finished with the recordings, mixing and mastering of their third album “Ashes and Cinders”, a Black/Death Metal concept album and organizing their upcoming live shows and tour.

This Is Black Metal Webzine had a chat with Dimitris Peppas (Guitars) about the past the present and the future of this project.

This Is Black Metal: Hails Dimitris and thanks for this interview. In the wake of your return to Latin America tour, what are your feelings? How was your perception there the first time around?

Dimitris: We are excited! South America was one of our tour priorities, especially for 2022. We can’t wait to live again that special bond that Brazilians, Argentinians and other Central and Latin American people have with Metal music. We hope that they will make even more noise than they did 3 years ago. This tour was one of a kind experience, we felt like thousands of miles away from home. We feel blessed that we are able to make it again this November covering even more countries (Mexico, Colombia, Uruguay, Chile, Bolivia, Argentina and Brazil).

TIBM: How is life on the road? What difficulties do you face and any strange stories to share?

Dimitris: For sure, it is not an easy task. Lack of sleep, big distances, rush to the venue, places that you are not able to see as much as you want. But the passions, the chants, and the nice words you may get from the fans are the best reward. It gives you the strength to carry on (trust me, it’s not a cliché). As for the road stories, maybe we will need two more interviews (laughing). Not all stories are to be told, but surely we won’t forget a nearly deathly road accident when our van almost fell into a deep gorge in Serbia and after a lot of suffering, we reached the next venue after the doors had opened. 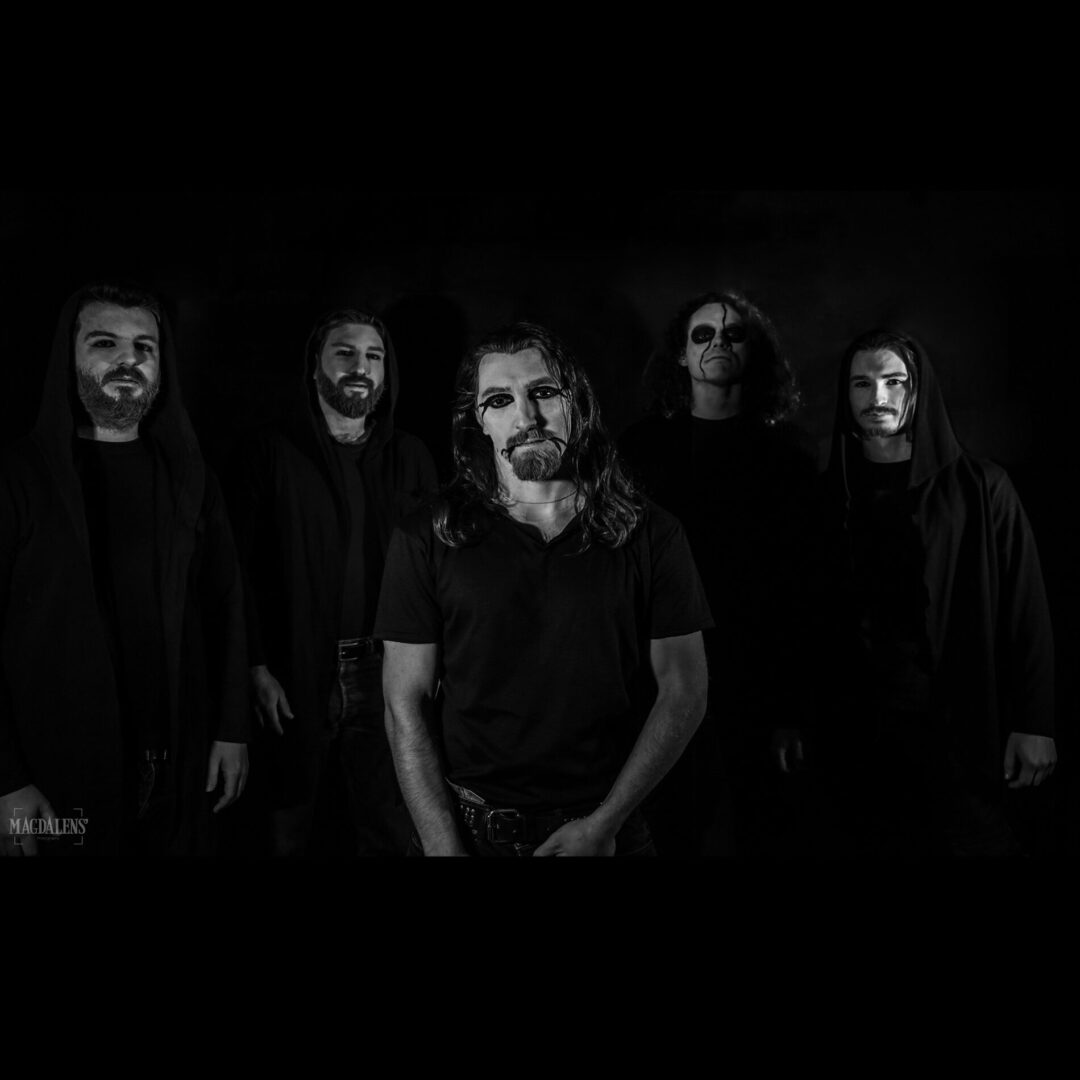 TIBM: This time you will be presenting yourselves as a Black/Death Metal band. What inspired you to make the transition from your previous Thrash Metal albums?

Dimitris: In my opinion, the reasons why we made the decision to change our musical direction were the will to experiment on something more Extreme musically, the fact that we were not so much into Thrash anymore and maybe because we felt limited in this genre. We are more than satisfied with the path that we follow now.

TIBM: With the drastic change in style and experimentation with different instruments like the saxophone, how did you approach the creative process? Did all the members contribute?

Dimitris: The creative process was surely more challenging, as we were then newcomers to the more Extreme-sounding bands. Hercules (our singer) and me, were the main songwriters, but it took us more time since we spent much on the pre-production process with the invaluable help of the album’s producer, George Bokos.

TIBM: Do you think it was more difficult creating a concept album? What was your inspiration to capture the feeling of grief?

Dimitris: It is more interesting. It takes more time, but it pushes us to be more cohesive and creative. I spent time talking with psychologists and other experts to have a realistic perspective of the troubles that mentally disrupted face and put it on paper. I worked on the concept of the stages of grief because we all had faced hard times the previous year. So I use the lyrics and the character of the concept to put this down.

TIBM: Has your attitude also changed while playing live in a more atmospherical setting?

Dimitris: Yes, to a great extent. We also have specific stage wear, but we do not use it as a usual extreme “devilish” concept. We work hard to make those who attend our show feel it is like a performance, a ritual.

TIBM: How was the whole situation with the lockdowns for your band not being able to tour?

Dimitris: Although it was not easy for anyone, we did our best to put all of our effort into the songwriting process and the recordings of the 3rd album, “Ashes and Cinders”. We also made a lot of plans that we tried hard to accomplish when there would be no more lockdowns and restrictions. It made us hungrier for tour runs.

TIBM: As I am aware there’s a 10-year anniversary concert coming up in Athens in December. How do your affect your progress looking back at all these years? Anything you would do differently?

Dimitris: Yes, we are organizing a special live show on Friday the 16th of December at Temple Athens to celebrate this 10-year journey. There are not many things that we regret. What I would change maybe is that in some situations we could have asked for help. We have got used to making things on our own, but a good piece of advice is always needed, especially from those you trust and respect their opinion. In any case, we are proud of what we have accomplished and we feel ready for a bigger step up. 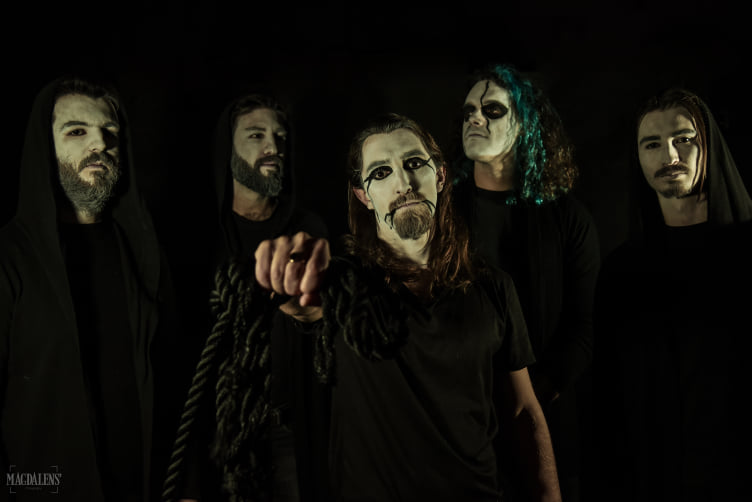 TIBM: As part of your live, there will also be a set dedicated to the late X. Of Human Serpent as you announced. What is your connection with this band and how did you manage this loss?

Dimitris: Since 2018, we have had a strong attachment with Human Serpent. Our singer Hercules was one of the 3 main members of the band till 2021 (H. in Human Serpent). He was one of our main supporters, one of those that always told us “keep your philosophy and plans and I will back you up in all ways”. We also had some plans together. The band’s drummer I. will get on stage with us on our anniversary show and we’ll play a Human Serpent set in memory of X. It is something that means a lot to us since we will cover songs from their whole discography, also the latest release “Heirlooms eternal”, which depicts his own life till the end.

TIBM: Will your set list in Athens consists only of your latest material or also from previous works? Is it more anxious in front of your home crowd?

Dimitris: We will play “Ashes and Cinders” in its entirety and 1 or 2 older songs. We are entirely focused on our new era, though keeping our own philosophy. We feel more anxious in front of the home crowd because we see well-known faces from the stages, all those who believed in us from when we were high school students chasing their dream and because we do not play that often in Athens, since we focus on the live shows abroad.

TIBM: What are your goals moving forward as a band? Will the next album follow the same style as «Ashes and Cinders»?

Dimitris: Other than fixing the last details of the South American and the anniversary show in Athens, we are tracking down new album ideas and many more things that will be announced in the next few days. The ideas we are working on are in the same spirit as “Ashes and Cinders” and may be more Extreme and complex, with more melodies and use of saxophone. Our goal is to make 2023 a step-up year for us.

TIBM: Thanks a lot for the time to answer these questions. I leave it up to you to send a message to your fans all around the world

Dimitris: Many thanks for this conversation. See you soon at a venue near you. Prepare yourselves for more from us soon!