Dániel (Guitars, drums, backing vocals) ans S. (bass, vocals, guitar) from Black Metal act Svoid (2009) who described their sound as Anti-Cosmic Metal, chat with us about the band, upcoming album, the Hungarian metal scene and some other interesting topics…

S: Greetings. Svoid was formed back in 2009 as a title for a project which wrapped a live presence. I have started to put together the first compositions based on the ideas so soon, as a reflection which lead to the first, debut EP called “Ars Kha”. The term “Chaotic Art” expresses its shape so well; a deeply rooted, inspiration-based influence which channeled from our primaeval sources. Later, in synch with the full live line-up, following the impressions I established Svoid as a full fledged band. With this primary change we approached through the first album called “To Never Return”, which was already a bit high in the spheres. Our different sources left their mark in our music, so that we let the unbound progression unfold. A single called “Devil’s Blood” dedicated to a strange cover from Watain and then the second album titled “Storming Voices of Inner Devotion” have shown that there are more to come and how exactly we do interpret ourselves as a channel between Life and Death.

TIBM: You’ve had some lineup changes in the past, how did it affect the band?

S: Apart from the current line-up there were always a creative task force, a mind and spirit in the band which allowed us to walk on an invariable passage we’ve chosen. It is not necessarily a person but a core, an essence. It is there from the very beginning and leads us onwards the aimless path. After so many cursed years we had infinite shapes and forms on stage which challenges us, but it is also a method to express formlessness. Of course every change has a particular inspiration how do we establish and settle ourselves to outline the desired Void and Null and I feel so objected.

TIBM: What is the process of composing, Where do you get your inspiration from?

Daniel: Since most recent times, when S and myself start to work on tunes together, we do not begin with a single ‘riff’. Rather we discuss the atmosphere, the likelihood, what should it express overall. These basic things give a certain direction. Upon them, we can zoom in and deal with smaller ingredients.

I listen to a large amount of music, mainly exploring unknown ones for me. Fortunately by this, there is a fountain of ideas inside my self so I can come up with drafts almost automatically. It may change as time passes but there is still much to be composed as I feel. I am opened to inspect others’ technical solutions, structures, soundscapes, like ‘how they do it’. All in all, regardless of any specific genre, I am into only the work of leaders, not followers. It inspires me how to use music for wrapping thoughts in a well-understandable, supreme formula.

S: As stated, primarily we work out the main ideas which are not strict, are not carved into stone. They are more feelings, reverberations we want to capture. When it is achieved, we extract it using our means we yield throughout our times. Tools are chosen for purpose, not the other way around. Apart of it, inspirations can be derived from anything which relates somehow to the ultimate and divine End we call for. If it is purely intended within music, then of course the same applies. We both have a wide range of inspirations from afar to now, here today, which has its mark and will have everlastingly.

TIBM: Both your albums “To Never Return” and “Storming Voices of Inner Devotion” had great reviews, do you feel any pressure of how the fans and media will receive your next work?

S: Nothing from the outer space should take into account. We follow our intentions and we are aware of bearing of Svoid to be reached. The progression has no end and we left so many fragments which joined the early days with our coeval, our current. Both full-length releases are already did their role in our history and we proceed towards the monument built on the ruins of our foregoing days. We are released now. Svoid are settled on a different basis which is definitely a new chapter. Call it evolution, growth or transformation; it is happening. So it is! Nothing should matter. 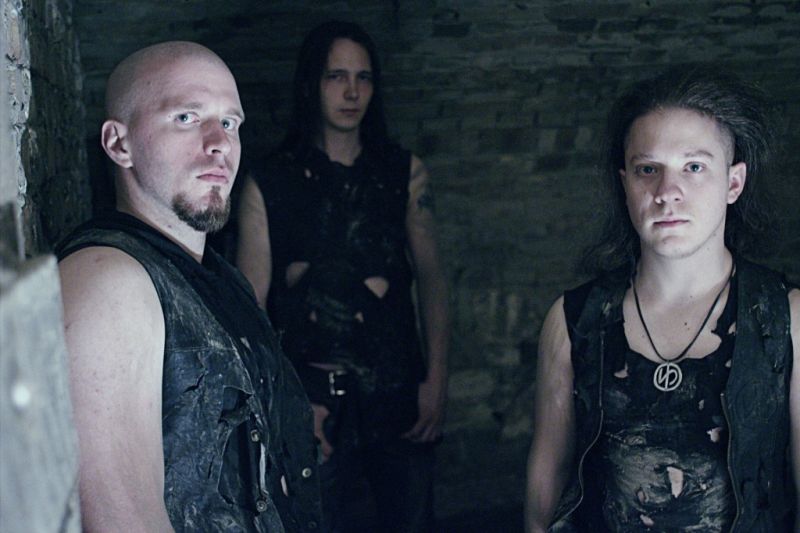 TIBM: Are you already working on a new album? What can we expect from it, is it going to be on the line as the previews records?

Daniel: Your question is more than actual. We will mess things around us with our coming release. It has already began. It may be surprising – we kind of reformed our sound by letting go the Black Metal surface nearly at all. I mean, instead of the extreme nature of our sound (death growls, aggressive drumming) we started to use more melodic approach to create an even more empty, more grey tone. ‘We went pop’ to say it rude but this sentence can be misleading. Even though we found another language to speak on, our mouth calls the same timeless Death. It is a more primary motivation.

So nowadays, since October 2017 we play live in this way. The urge for this change could not wait any longer. We are working on brand new tunes in this manner. These reborn vibes are still in on their way to find ears out there – and they will.

S: Our progress already had significant milestones if you like. As part of a slow but sure process we got rid of the single-dimensional accession. Entrance of elements from post-punk, using more direct song structures, refrains were already sorts of disorder for quite some people. But it is not accidental. These became our tools of expression as a declaration. We are using clean vocals on the compositions, we are not hiding our words anymore. This silhouette has more in mind and patterns and they really inspire us. Expect the unexpected; we argued so much and now it is there. A pure post-punk(ish) experience about Void and Death which liberates from the chains…

TIBM: What are your reference bands in the genre?

S: If someone recalls any former interview with Svoid, we were already addressing the primary inspirations outside Black Metal. And since we are outsiders here, left the path already, with approval we can reference these bands again: The Cure, U2, Pink Floyd, Siouxsie and the Banshees, Hurts, Aphrodite’s Child, The Chameleons, Editors, Coldplay, Pink Turns Blue, GravenHurst, and the list is endless. The poisonous, intolerant psych of Black Metal will denounce us eternally, no question, but we found new ways. And we give All to get Nothing…

TIBM: Do you have any shows planned for the upcoming months?

S: There are no shows announced at the moment. We are negotiating the forthcoming appearances, which is quite tough when you have a harsh and excessive past like ours. Now we are into the new compositions to come out, which at least will help to have a definite picture of all we are talking about. Once it is settled, we will have more to come up with; it is for sure. Right now we are arranging our presence at an open-air music festival, which never happened to us in the past.

TIBM: How is the Black Metal scene in Hungary?

S: This is something expected, but based on the previous answer we gave quite an insight that there are major changes which separate us from the scene. Even during the past years we didn’t maintain that intense connection to the scene. Svoid were always a band from the edges, a band with extraordinary covers (which are now our present, not surprisingly), with less relation to Black Metal. Of course we found ways to express our gratitude to our roots with for instance playing the first Bathory album live or touring with (The True) Mayhem, however these are boundaries. Coming back to the question I barely follow the releases or other acts but there are quite some active bands, fanzines and record labels on the scene, with from time to time festivals and other underground disclosures. Bands like Ygfan, Pagan Megalith, Туман, Dunkelheit, Lepra, and Niedergang are enchanting for instance. Outside the underground of black metal going beyond I truly appreciate Bornholm and Sear Bliss, a few pillars of inexorable pursuit and acting…

On record labeling and distribution there is an inconceivable effort spent by underground maniacs from Neverheard Distro, Sigillvm Tenebrae, Funeral Chant, Fekete Terror and Terranis for example.

Besides that there are underground acts and festivals e.g. Under the Ashes Festival, Inner Awakening Festival, Total War Fest and the list is not exhaustive… So there are quite a lot to explore…

…Even so we are not part of it anymore.

TIBM: What are the plans for the future of the band?

S: Most of them were already mentioned recently. New single(s) and full album release are approaching, but nothing is settled yet. We would like to annotate one (or some) of our compositions with a music video, and of course primarily we should be on stage. It is not the end, we have more to tell about the same Darkness until we are taken back to Void.

TIBM: Do you want to leave a message for our readers?

Daniel: Well, keep on seeking for the grand ‘Meaning Behind’. It will be fascinating to find None.