German Anti-terrestrial Black Metal band Magoth, who released their debut album last year, talked with This Is Black Metal about the concept behind their sound, their album and the Black Metal scene.

This Is Black Metal: Thank you very much for this interview. What can you tell us about Magoth?

Heergott: You’re welcome! “Magoth” is a Black Metal Band I founded in 2011. My desire was to express myself and as well produce music that I like to listen to. I started to create songs and arranged a lineup of brothers in spirit that works with a lot of power. The essence of that is the sound of “Magoth”. And we’re all shaped by our own musical experiences. So it is obvious that our sound lets people recognize several influences in our music. It’s not about reinventing the wheel – we’re here to spread Black Metal that sounds and feels great! 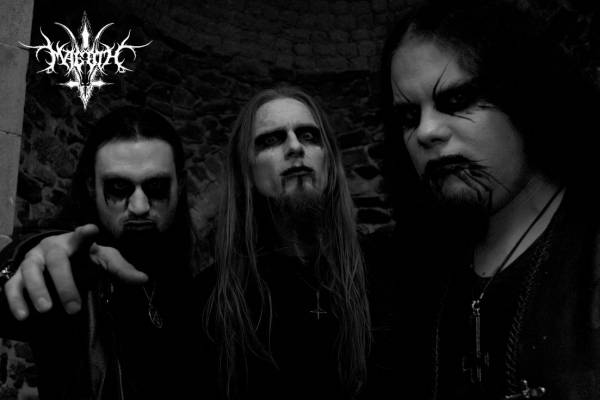 Heergott: Actually I was searching for a name that describes something monstrous, otherworldly and vigorous. After I learned about Abraham von Worms and the sinister spirits that subordinate under Lucifer, Leviathan, Satan and Belial the ideal name was found: “Magoth”.

TIBM: Your debut album Anti Terrestrial Black Metal” has a cold, dark yet melodic atmosphere, did it meet your expectations?

Heergott: As a music fan I say yes, as an artist no. As music listener I have the opportunity to explore the music itself without any reservations. Especially when I experience new music for the first time. As an artist I’m involved in endless hours of practicing, the songwriting-process, the recording-process and consuming vast amounts of beer (laughs). This gives me a profound perspective on our music. But after all I’m very proud of the result and it enforces me to create more music.

Shagnar: In contrast to Heergott I can stand back from it because he’s the main songwriter. I remember listening to the master copy for the first time when I got captivated to its final outcome. A rough and strong forward pushing creation, accentuated with an unique atmosphere. We got and still get a lot of great feedback and receive album orders from all over the world – only recently from Oman. It’s gorgeous to see how our music and spirit is mesmerizing our fans. They tell us they got into a trance-like mood while listening to the album and others play it up to five or six times a day. So I think it has even bested my expectations. 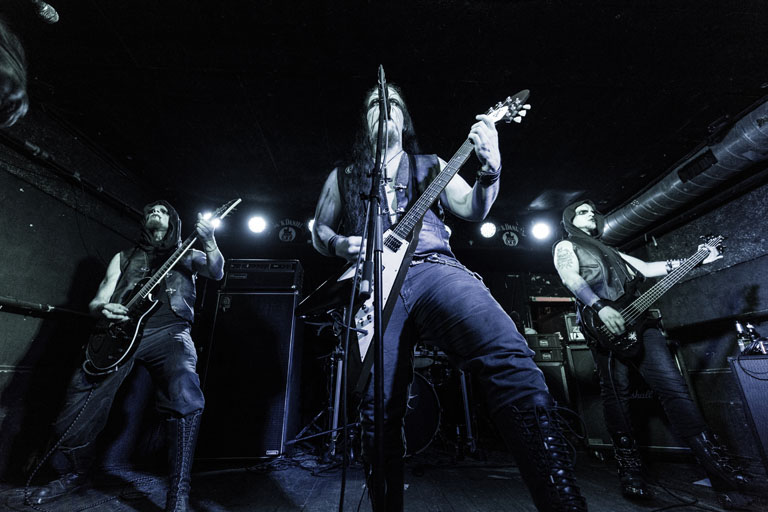 TIBM: What is the meaning behind the concept of Anti Terrestrial Black Metal? An Escape from our everyday lives?

Heergott: “Anti Terrestrial Black Metal” is a collection of songs and lyrics that describe my inner struggle with the world that surrounds me. It is about suicide, depression, the realization of mortality, my evaluation about humankind – which is indeed truly close to extinction –  and the pain those thoughts cause in me. So it is rather a portrait of the deepest part of myself than an escape from everyday life. It is honest.

TIBM: Would you consider have some guests on your future albums?

Shagnar: Never say never but at the moment no. Because Magoth is not just a gathering of musicians. The spirit of Magoth gets fed by ourselves and the essence of it is what you can hear. We have known each other for quite long and spend a lot of time together – mostly in our band’s room. Our hearts’ blood is eternalized in our music. Additionally there are lots of ideas in queue and we have big plans for 2018. 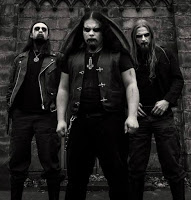 TIBM: What is your favorite song from the album?

Heergott: Of course I would have to say all of them (laughs). But if you ask me which song actually hurts the most I say ‘’Der Toten Gesang’’ – since that song is very personal, almost too personal. On the other side ‘’Cleansing of the Ancient Spirits’’ and ‘’Cosmic Termination’’ give me the most chills during the live shows.

Shagnar: Depends on my mood. But I think most likely “Sola Scriptura”. It was the first track Heergott and I created in cooperation and I’m stunned about the energy and atmosphere the song spreads. On the one hand a destructive might, on the other hand a very melancholic and powerful but also crushing end. The atmosphere is magnificent.

TIBM: What do you think about the evolution of the genre since its beginning until now?

Heergott: I think Black Metal had a very artistic attitude in the beginning but got commercialized by the Norwegian scene in the 90’s. Between 1996 and around 2006 Black Metal was very exclusive and I think the strongest records have been released during that decade. Afterwards social media became a strong tool for promoters and Black Metal got commercialized again. Nowadays it is very easy to declare a band as ‘’established’’. Even when they started to play just 2 years ago. It is more about how much money labels invest in advertisements instead of how you earn reputation because of the quality of your music. But that ‘’hype’’ has some good sides, too; a lot of really good and strong bands are coming up and revive that former artistic approach on Black Metal which ignited this special type of music even before the 90’s. 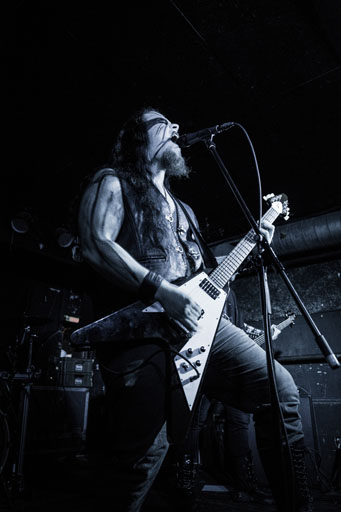 TIBM:You will be playing in some festival this summer, what can we expect from your live performances?

Shagnar: Speaking for all members, we see “Magoth” as a live band because we’re living the moment. The rehearsals and meetings give rise to a tremendous energy which is reflected in the live-shows. Currently we’re performing our debut “Anti Terrestrial Black Metal” in full length. I would describe it as a rough trip through the spheres of black metal. It’s amazing to look people in the eyes during the live shows and to see how they’re going through this aforementioned trance like mood. We work closely with our sound engineers to put forth such an intensive sound experience.

TIBM: Can you recommend us some good German fellow bands?

Heergott: Helrunar! The band’s attitude and music has a huge influence on how I think black metal should sound like in an artistic way. As well Dark Fortress and Nagelfar. And Keep your eyes open for upcoming German black metal bands, as their straightness, strong attitude and a deep emotional sense under their armor will blow your mind.

Shagnar: A revival I’m looking forward to is “Thornostrum”. A great black metal band from my hometown that reunited in 2017. Sadly I never got a release of these guys but I remember quite well the cold and mystic atmosphere of the songs. Keep your eyes open for them! Furthermore “Fyrnask” (especially the album Fórn) and if you’re into much deeper vibes the German/Danish band “Heilung”. 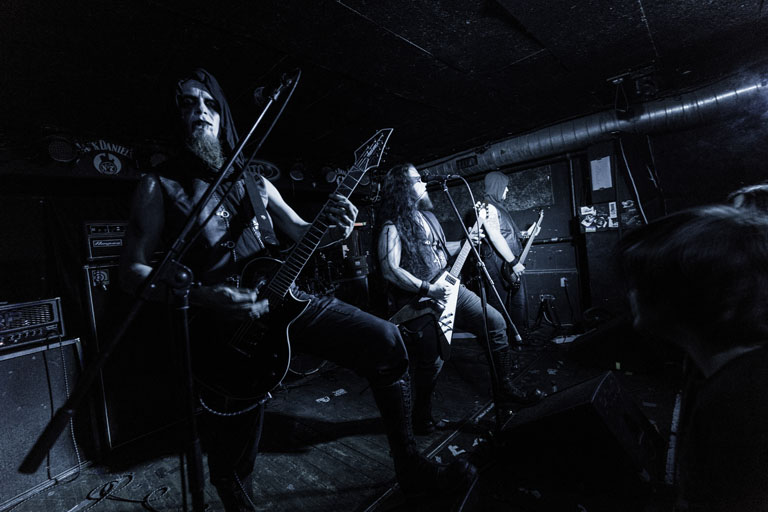 TIBM: Finally, would you like to leave a message for This Is Black Metal readers?

Heergott: Be curious, don’t let someone else dictate your life, be weird, learn to say no, appreciate every day of your life since you never know if you will witness the next day. And most of all: Keep supporting Black Metal!

Shagnar: Trust your senses and analyze open-minded what’s going on around you. We’re damned at different levels, there’s no way out of this vicious circle. But at least we have the option to pass away in knowledge. Just never limit yourself to only one view.

TIBM: Thanks guys for your time !

Heergott/Shagnar: Thanks for having us. Stay blasphemous!