Some say Finnish Black Metal is making a comeback, but I pose the question…did it ever leave? For me, the Finns never backed off from creating some of the most insanely intense Black Metal sounds in the world of this lawless sub-genre and Korgonthurus is proof of this. They hail from Helskini and after a few changes to their line-up over the years, they are fighting fit, very aligned as a band and have just offered us a heavy smash in the face by way of their latest album, Kuolleestasyntynyt, released this year, 2020.  I was very excited about the opportunity to speak with Kryth, drummer, and guitarist for Korgonthurus to discuss topics of their latest release, gig life and Black Metal in general.

This Is Black Metal: Hi Kryth, thank you for giving me this opportunity to speak to you, it’s much appreciated. Let us start with how Korgonthurus formed, and what was the driving force toward Korgonthurus creating Black Metal above any other genre of Metal?

Kryth: Korgonthurus was formed from the ashes of our previous band Soulless. Soulless had a more melodic approach and more speed. We wanted to make something simpler and uglier and thus Korgonthurus was created.

Black metal is not only music. It is also spiritual and a very fitting channel for worship. It’s the only genre to me where the message is more than the audial side.

TIBM: For those who have been following your work since the beginning in 2000, there have been several changes to your line up as well as the band forming and disbanding a few times too. Do you feel more settled in your direction as a band now with this current line up and what was the pinnacle turning point where you felt the band is now aligned to push forward as a solid unit?

Kryth: The first disbanding was due to mine and our original guitarist, Sedit, not seeing eye to eye musically. He wanted to add technicality and more melody, but I wanted to stay raw and primitive, so I left the band. Sedit and Corvus continued without me for a while before changing their name to Sear and continued with new members and totally different music. Since we reformed with Corvus, me and Necron, we have never had problems with each other’s songwriting and everything went smoothly. Then in 2010, I had so much chaos in my personal life, that I had to leave the band for the second time. Corvus and Necron kept the flame burning and asked me to join them again in 2013. That’s when we brought Incisura and Saturnus along so that we could start performing live with a full line up. The disbanding of 2017 was unfortunate, but it had to happen. I have nothing else to say about that. We continued with Corvus by the two of us after a few days after the band had broken up as we needed to finish what we started with Kuolleestasyntynyt. Insanis Xul helped us to rehearse Kuolleestasyntynyt and eventually was asked to join us permanently. Shortly after Incisura was asked to rejoin, this time as bassist. Now we feel more powerful than ever.

TIBM: Your previous album Vuohen Siunaus had some great thrashing moments, tight grooves and elements of DSBM sounds. Now moving forward to your 2020 release, this immediately feels more vengeful, dark and ungodly yet still, with those familiar sounds of Korgonthurus.  What is the story behind your latest album Kuolleestasyntynyt and what is the driving force for the dissonant and evil sounds that devastate this album?

Kryth: Vuohen Siunaus was a result of over 10 years worth of material. It was a combination of several moods and moments from our past. Kuolleestasyntynyt was composed of fresh material apart for a few riffs that date back to mid-2000. The songs basically wrote themselves as we began writing them after Vuohen Siunaus. We then rewrote half of the songs three times and took our time to really perfect the compositions. The atmosphere and devotedness kept on solidifying and we finally were ready to start recording the album. In the process, we discarded almost 30 minutes of songs that were intended to be a part of the album. Two songs will be surely recorded at some point and the last one we cropped will be the base of our next album.

TIBM: There are so many Kvlt moments within this latest release, yet you guys have kept that signature roughneck heavy metal riffage and rhythmic beats, it’s a sign of Finnish Black Metal not conforming to any strict sound of this sub-genre.  Is this a deliberate approach, or is your sound influenced by varied forms of music that sit outside of Black Metal? And if so what are they?

Kryth: We make music. We don’t really care what it sounds or SHOULD sound like. We’ve always done just what we wanted. Sure, we listen to all kinds of music, but it doesn’t resonate in our music. For example, I’ve been lately listening to mainly industrial/EBM/aggrotech and goregrind, but you can’t hear that in our music. Anything can be an influence. It doesn’t even have to be music. I find inspiration in music, literature and spoken word, urban noise and sounds of nature. Everything can be channelled into music and lyrics.

TIBM: What is the story of this album? Given the lyrics are in the Finnish language, can you please explain the themes to Kuolleestasyntynt.

Kryth: The seminal theme in the lyrics is a sort of a rite of passage. Mental evolvement and ascending to a new level of consciousness.

TIBM: I did read somewhere that your lyrical in your earlier days was more primitive and aggressive and has now progressed to more of a philosophical nature. What was the reasoning for this change in writing direction and what sort of philosophies are of interest to you as a band?

Kryth: We grow older physically and mentally. It would be redundant to repeat screaming fuck christ and hail Satan. We should aim for spiritual and philosophical progression instead of repeating ourselves. Satan is mentioned less in our lyrics today, but that doesn’t mean that Satan isn’t in them.

TIBM: Given the current state of the world with COVID-19, the music industry has been heavily hit with live shows being cancelled. What is your position on the live scene? Do you do many live performances? And if so, how heavily has this affect you as a band?

Kryth: We’ve played only one show since the summer of 2017 and we don’t plan to do many in the future anymore. This quarantine situation doesn’t affect Korgonthurus otherwise than we’ve had fewer rehearsals than usually. That also doesn’t matter because we can write more riffs in the meantime. As for concerts, I’m not that much missing on anything. I don’t go to shows as much as I did in the past. The only one I’m pissed off about having to cancel is Steelfest, which is a yearly highlight for me.

TIBM: Importantly, once the world normalises, can we expect to see Korgonthurus tour your latest album Kuolleestasyntynyt and if so, where would you be more than likely to do so?

TIBM: Listening through your previous works and of course your latest album, there is ambient and atmospheric passages, with time signature changes pulverising your sound into chaste of hatred and disdain with strong elements of dissonance and melancholy. This is a good mix of these subgenres of Black Metal, but it works! What is your take on the relationship of these different distinctive elements within your overall sound?

Kryth: Our first dabble with dark ambient-ish sounds was with Sielun Kuolema on our self-titled MLP. We continued it with Ristillä Mädäntyen and then took it to our maximum on Marras. We were fascinated with how we could keep a song together with adding something totally different into it. There’s still a possibility we could do something similar but to a way lesser extent. 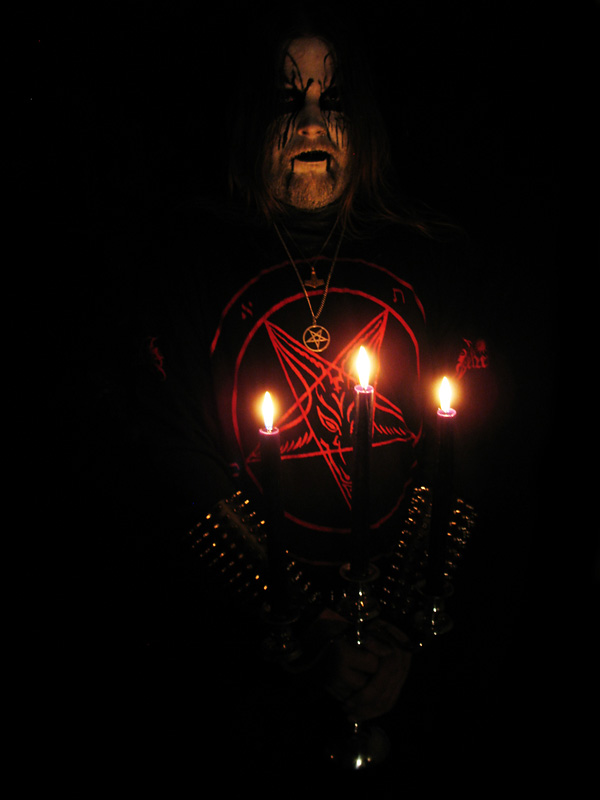 TIBM: Given how much Black Metal has evolved, tweaked and changed by varying influences, inspiration and the different surroundings of the countries were are hearing Black Metal created in. What does Black Metal mean for Korgonthurus? And in your own words, what should Black Metal be?

Kryth: Black metal is Satan. It has always been and will forever be. Sonic variations are limitless, but if the core of the message is there it is Black Metal.

TIBM: There seem to be more and more artists choosing to remain unsigned from a record label for various reasons. What is your relationship like with Woodcut Records and how important was it for you to be signed with them?  How does this working relationship benefit you as a band?

Kryth: It is a great honour to be a part of the Woodcut roster. Woodcut has been around since the days I started to get into Black Metal and it had been for years been a dream to have my music released by them. we also have to thank Mikki for everything and without him, we probably wouldn’t be here as we are now.

TIBM: I appreciate you taking the time to do this interview with me, is there anything you would like to leave the readers before we close

Kryth: Thank you for the interview! Kuolleestasyntynyt and the fully remixed Marras are out now in LP/MC/CD formats. Keep the black flame burning!