Grá was formed in 2010 by Heljarmadr and Dimman. The band has since then released an EP, three full-length albums, a mini-CD, two singles, a full live video, numerous live concerts and several music videos. Grá performs classic Swedish styled Black Metal, singing mainly in their native tongue. Since the beginning up until now all releases have been focused around the concept of death. From the longing for death to the dying and further on to the passage to the other side. The name Grá comes from a mixture of the Icelandic “grár” and the Swedish “grå”, simply meaning “gray”. The major content of the lyrical concept is based upon the ancient Scandinavian religion, or rather upon the dark aspects of ancient Scandinavian spirituality. This Is Black Metal Webzine found Mr. Kareketo (Vediger), the bass of this great band and asked him about their latest masterpiece “Väsen” and his opinion about the future of Black Metal music.

This Is Black Metal: Hello, thank you for taking some time to answer to my questions, Vediger What were your first steps in music and when did you realize you wanted to be a musician?

Vediger: Good evening Lígia, and everone else who is reading. My first step as a musician started when I was 6-7 years old. It was discovered that I really enjoyed playing string instruments such as chello and guitar. Now, I don’t think that anyone would say that I was any good at playing these instruments, but at least I enjoyed it. And that has been the case ever since. At the age of 9 I was allowed to play my uncles drum set as often as I had the chance and by the age of 11 I got my first (used) drum set. Over the following years I played different instruments (drums, bass, guitar) in different bands. I played with as many bands as I could, constantly wanting to practice. And 8-9 bands later I found myself playing with a few good friends as dedicated as I was, one of them being Heljarmadr. And we’ve been playing together on and off since 1996. The off-seasons were mostly due to geographical reasons. And here I am now, still enjoying the aspect of playing and creating music together with good people.

TIBM: What was the first Black Metal gig you went to and what are your memories for that night?

Vediger: That would have been a local band, back in 1995. I grew up in a small and grim city, way up in the cold northern parts of Sweden. The town was a mining community that just simply didn’t arrange live shows featuring any extreme metal bands. I forget what the band were called at the time, which isn’t really important. What I do remember is the feeling I felt when they started playing. It might have been a mix of my teenage hormones and this new experience, but as I stood there surrounded by friends and other acquaintances, listening to this band, I felt completely and utterly invincible. I felt that this was our music. And no one would be ableto take that away from us. It was quite a significant moment for me as a 14-year-old. I occasionally still get that feeling while I’m listening to a really good live band. 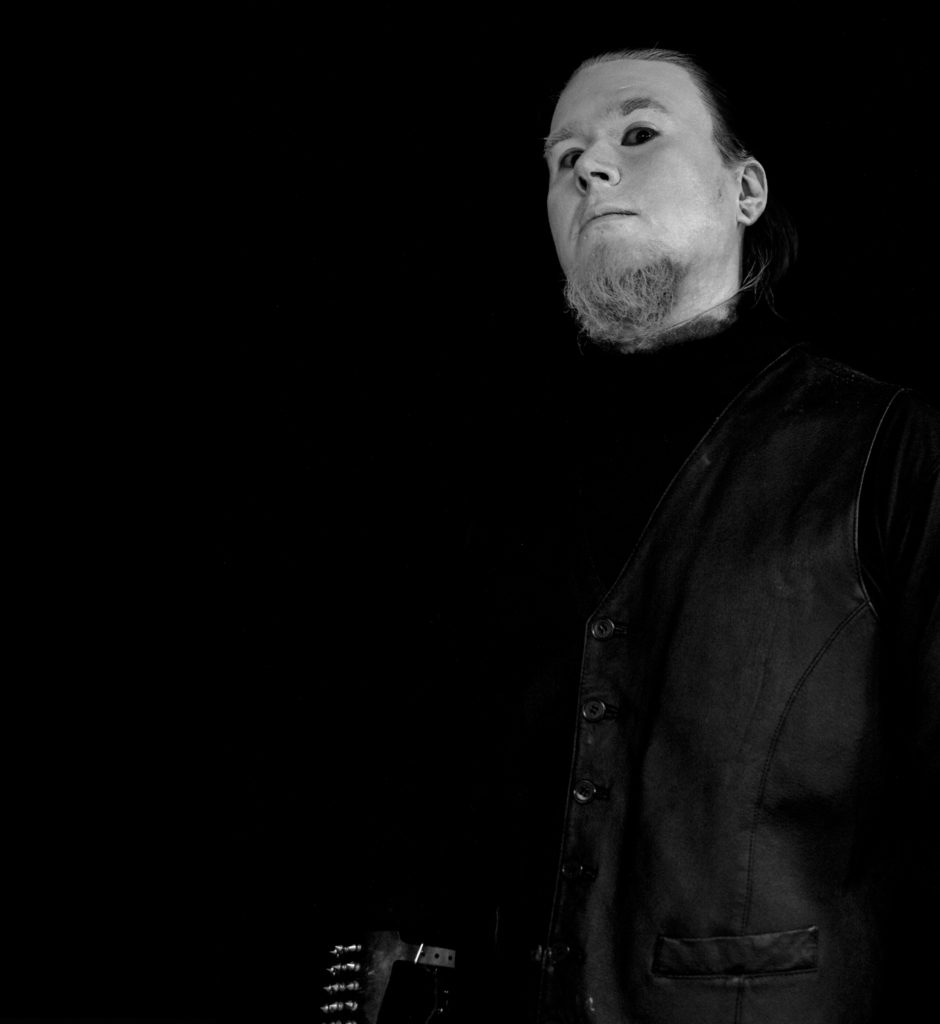 TIBM: Väsen had great reviews and i think it’s a very tight, passionate fast record with an old school feeling to it. Everything went easy during the recordings, or did it have some stagnation?

Vediger: That’s very kind of you to say. We too are very pleased with the result. Obviously, otherwise we wouldn’t have released it. But I’m not in any position to say if it went easy or not. Heljarmadr was in charge of the recording process and the majority of editing, mixing, mastering and over-all producing process. The songs that were written for “Väsen” pushed each and everyone of us as musicians. Which was great. None of us want to stagnate in any way. But other than those personal challenges, I would say it went rather smooth!

TIBM: I believe we can say Väsen is a new era for Grá with the charon concept ending with the previous work. Would you agree?

Vediger: That is very true. Grá have thoroughly explored those plains beyond our world. The myths of the old gods and ancient rituals have all been evoked through the medium of our music and lyrics. All that is left to do in order to explore it further, is to simply make that final journey on ones own. Just make sure you bring a coin for the passage. But for Grá it is time to continue exploring other realms beyond our own, in every sense of the word.

TIBM: Will you do other concept albums in the future or is it out of the equation?

Vediger: That’s hard for me to say at this moment, mostly because I’m not the music or lyric writer. It is very possible that there would be another concept album in the future, provided there is a subject that is interesting and significant. But what I can tell you, is that Grá will not make a concept album just because people are expecting one. That much is at least certain. But, to say that it’s completely out of the equation would just be us painting ourselves into a corner. He who lives will see what the future holds.

TIBM: Väsen has interesting cover art, what’s the meaning behind it, can you explain it?

Vediger: We are very pleased with the result ourselves. The creator of this well-received piece of art is a Swedish guy named Axel Torvenius, an acquaintance of  Heljarmadr. Axel hadn’t really done any Black Metal covers at the time, as far as I’m aware. He was more known for being the Art Director at MachineGames and the creator of interesting sculptures and other miscellaneous art. We set up a meeting where we met up with Axel to discuss the project. We gave him some early demos of “Väsen”, just to give him a flavor, then we discussed very broadly what we had in mind. Then during the following months Heljarmadr and Axel kept in touch and bounced some ideas. The actual album cover is an extended interpretation of the album’s title, “Väsen”, which has many different meanings in the Swedish language. One of them being, “Entity/ soul”. If we observe the cover we can quite literally see a soldiers last moment in his mortal body, as his soul continues charging forward. You can’t destroy a powerful force with a bullet, evil will continue marching. The rest is up to the person observing the art. 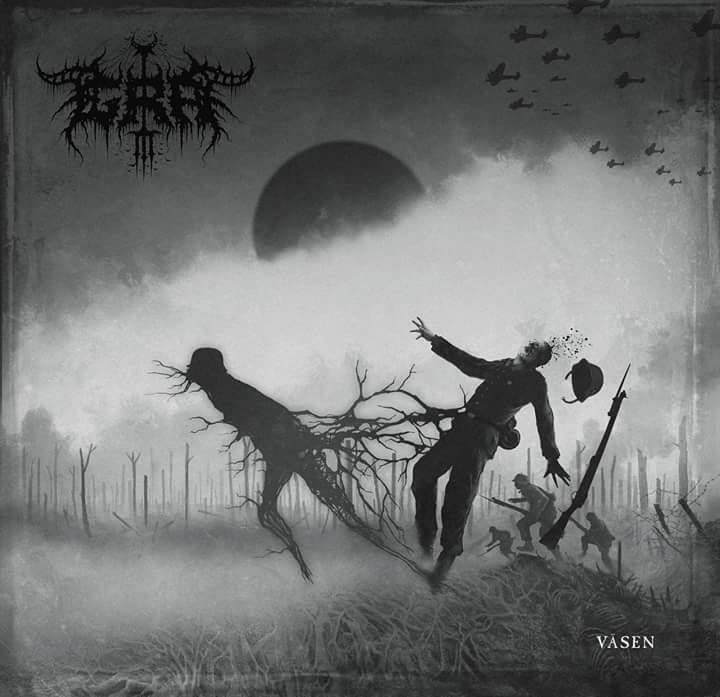 TIBM: Black Metal is experimenting, what can we expect from your music in the future? Do you believe there’s still a lot of boundaries to push, musically and lyrically speaking?

Vediger: To me, whether or not a piece of music is Black Metal or not, has always been about the feeling I experience while listening to the music. So I wouldn’t say that there are boundaries that need to be pushed or broken. But if it happens in the process, that a band does something experimental, and it still feels Black Metal, then that can be really exciting. That has been the main approach to writing music and lyrics in Grá. Heljarmadr (and Dimman) are just naturally creative and talented musicians. Everything Grá does happens naturally and organically, nothing is forced. But the problem in today’s Black Metal scene, in my opinion, is that once a band does something new/original and exciting, then there are tons of bands who just copy that and implement it in their own music (or image).

TIBM: With a lot of Black Metal musicians being against the Lords of Chaos movie, what is your opinion on that matter?

Vediger: It’s a movie produced in Hollywood, I don’t really have a strong opinion about it. I wasn’t personally involved in the whole thing. As a young teenager I followed the events through a few articles in different papers (fanzines and tabloids) and some rumors from friends. The rest of my knowledge of the events came later from all the different documentaries that have been made on the subject. But I don’t know how reliable any of these sources are anyway. And as I said in the beginning, it’s just a movie produced in Hollywood. I will probably end up watching it sometime during my life, but I will not queue up at the cinemas. I’m not that interested in it.

Vediger: That’s always a hard question, but I felt that Panphage – Jord stood out musically, also it stands out because it’s his last album. For those not familiar with the music of Panphage yet, I advise you to give it a shot. Moving on, I’m sure I wasn’t the only one who highly anticipated the return of Immortal. And what a return Immortal – Northern Chaos Gods was! I was absolutely swept away by the whole thing. Lastly, I’ve had a lot of time for Funeral Mist – Hecatomb. That record have occupied my ears quite a lot since it’s release, a really solid and interesting creation.

TIBM: We reached the end of this interview, would you like to add some words?

Vediger: Thank you for your time and support. I might as well take this opportunity and mention that we’re returning to Athens, Greece on the 23rd of March 2019. Something we’re looking forward to, tremendously. We are currently preparing ourselves for the event and it’s shaping up real nice. Links to the event are up on our Facebook page. In fact, instead of me writing about everything Grá is up to in the near future, it’s probably easier if everyone visit our social medias. We are pretty good at keeping ourselves updated with what’s going on like new merch, new songs, announcement of gigs and everything else Grá-related. Keep your ears peaked and make way for the Devil’s tribe! ‘Til we meet again! 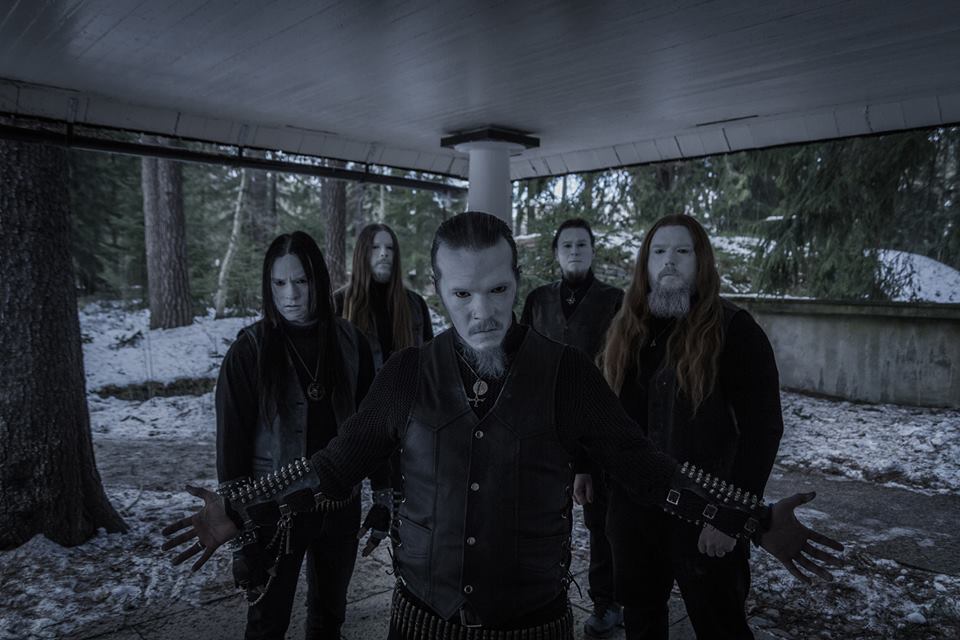 TIBM: Thank you for your time