Deadspace is a Depressive Black Metal band from Perth in Australia. A descent into the hollowed out void of a dejected soul, rejecting comfort, choking light, foreboding darkness. Deadspace is a band that deliver an emasculating and claustrophobic live assault. Unwanted, uncomfortable, unrelenting and unforgiving. This Is Black Metal Webzine found Chris Gebauer, vocalist of the band and talked with him about Deadspace and their future plans.

This Is Black Metal: Hello Chris, it’s nice talking to you. You have been a busy man with Deadspace releasing Dirge in January 2019 and in April this same year you have released a brutally dark and thought-provoking EP, Libido Dominandi. Was your plan to always have these two albums released so close together and why?

Chris Gebauer: Absolutely not. The main reason we’ve just gone independent from our ex label is due to requiring the freedom to drop music whenever we like. I want to be able to record, mix and master whenever I get pissed off about something and just be free with it. The Dirge release drove me insane because the songs were written so far out, but the label doing the right thing had a future date for release. No more did I want to rely on someone else to tell me when to release new music.

TIBM: Libido Dominandi for me felt like one of your darkest, most aggressive and demanding of attention releases to date. Can you give me some background as to what Libido Dominandi is about?  And is this a sign of a new sound for Deadspace given that there is an element of new sound within this EP.

Chris Gebauer: Libido Dominandi is basically a reference to ‘the will to power’. Whether it’s to be considered a sly Nietzsche reference, a general comment on sexual dominance/freedom, an Augustinian anthemic pursuit or a convictive critique on the Christian literary disgrace by the same title… well, it’s all of them. While this may seem like a new direction it’s really not. These riffs and heavier influences you hear were always there but buried under barricades of atmospheric elements. All we’ve really done is ripped off the blanket and moved away from what we believe was an emotion that had expired and realised that had allowed us to express more critical hatred that was lying underneath.

TIBM: You have two feature artists on your latest EP Libido Dominandi. C  Caedes & Déhá. What was it like working with these artists? And how did you overcome logistics given C. Caedes is in a different corner of the globe and Deha isn’t on the mainland?

Chris Gebauer: Well S Caedes is actually my girlfriend but when we work artistically we are very professional and honest with each other. We worked hard on narrowing down takes we both liked. It was actually funny cause the first comp I put together of my favourite takes were her favourites too. Really smooth, two sick minds think alike I guess. Déhá is a great man, musician, and producer. I literally sent him over the track with my vocals and lyrics, his part was back in 5 minutes, one take, done. Absolute monster.

Chris Gebauer: Hahaha I can’t say that. We have 1 or 2 on this new record but one wishes to remain anonymous and the second is TBC. 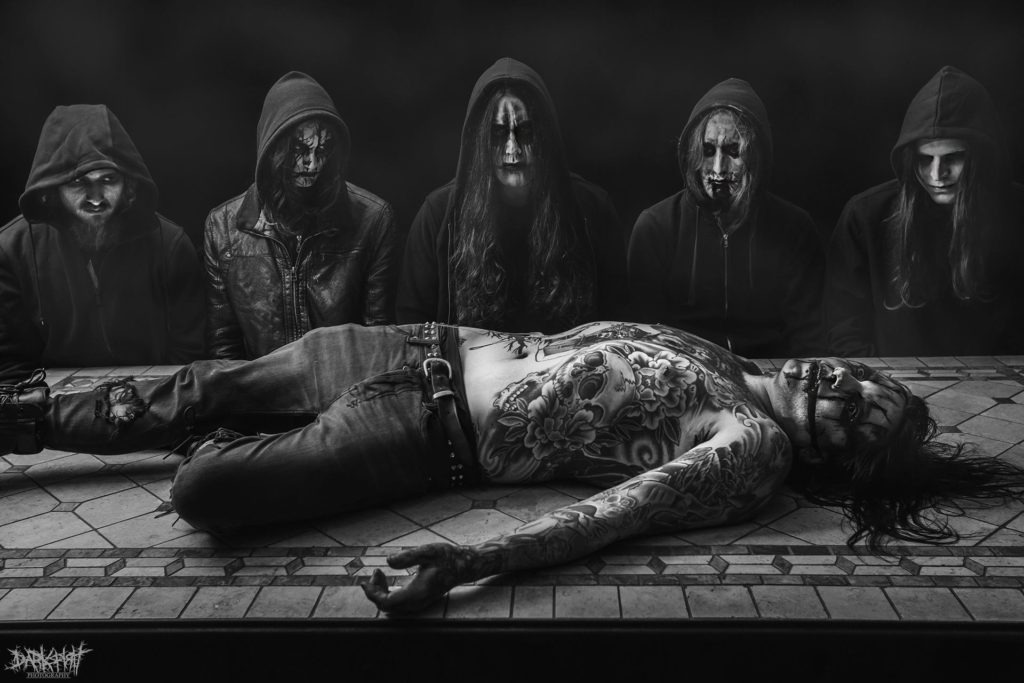 TIBM: Deadspace just completed a huge tour of Europe. How many shows did you do? Did you get much downtime between shows? And how did the band maintain their energy levels to put on an extreme show each time?

Chris Gebauer: 17 all up. Not much downtime at all which is GOOD. I hate off days. Lots of sleeping in the van, copious amounts of whiskey and vodka, a bit of extra-nasal hoovering. Business as usual.

TIBM: Can the East Coast of Australia expect a Deadspace tour anytime soon? And if so, when should we roughly prepare our bodies for this?

Chris Gebauer: Not a tour at this point but we are playing Hell On The Bay in Melbourne come Sept 6. We also have an Adelaide show in the works but still trying to fill Sydney, Brisbane, and Tasmania.

TIBM: There is a huge can full of exceptional Black Metal bands here in Australia,  and it feels as if the can is only just starting to open. Are there any specific Black Metal or extreme metal bands you can see yourself touring with in the future? and who would they be?

Chris Gebauer: Love the boys in Christ Dismembered so that’s on the cards. I would love to do some more stuff with Rise Of Avernus if their schedule permits. Septillion from Perth is sick, really fun to tour with too. We’ve always wanted to tee something up with Blackhelm too. It’s just never come up.

TIBM: The DBM metal community here in Australia, is it growing?  How do you think DBM or DBSM is perceived within Australia compared to say Europe?

Chris Gebauer: Not really. That’s why we’ve had to narrow our scope down here a lot. That being said I wouldn’t really say we’re a true DSBM band. It’s mainly my vocals that tie us to that idea. 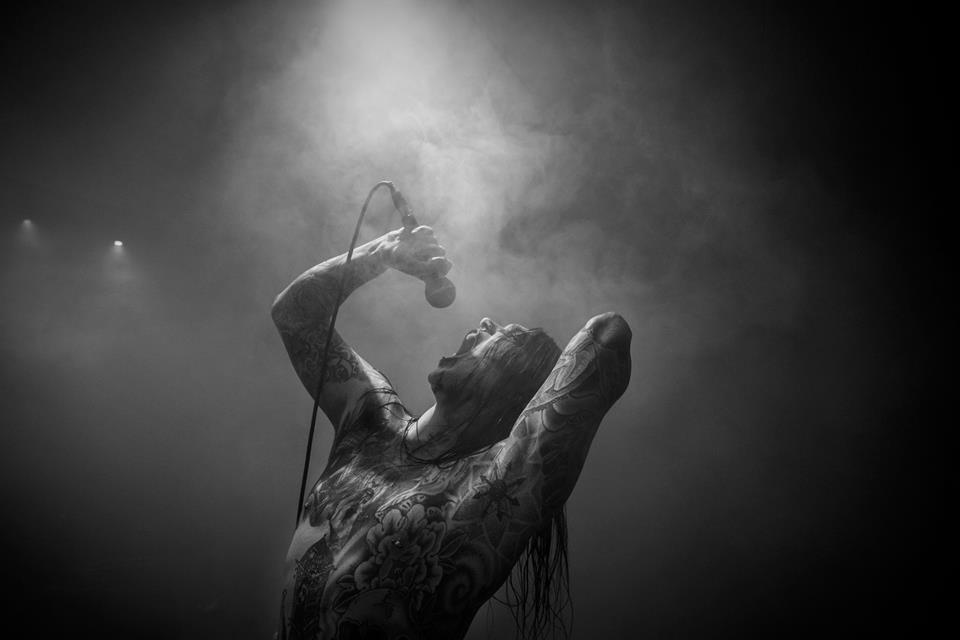 TIBM: There is a lot of hysteria around Black Metal lately. It seems to be the “in thing”  to protest about.  Do you think this is creating a situation where artists feel as if they cannot move outside the “not to offend” parameters, and given that DBM often lyrically touches on taboo and hard to talk about topics, has this affected Deadspace in any way?  And why?

Chris Gebauer: This has affected us by making me hungry to piss as many dickheads off as possible. I grew up in an anti-PC household. We have basic respect for humanity but we’re not going to tell someone that’s shit at their job that they’re doing great because they deserve their ‘safe space’. Nor am I going to condone the actions of political/social figures dishonest behaviour towards puppets they have fingers in. Or the people fingering them. Short answer, we don’t care if people hate us, as long as we stand behind our beliefs. We’re not looking to pack out Wembley Stadium or play half time at the football. If you step into a small music venue you’re likely opposing some kind of social norm anyway.

TIBM: What are your thoughts on Politically Correctness oppressing artists within the metal industry?  Do you think this will pass or become worse for those trying to express themselves in a music form?

Chris Gebauer: I don’t really think it’s affecting music. Maybe more the promoters that have to cancel shows and unfortunately the fans. The bands just need to find other avenues to reach their fans that aren’t facilitated by jaw flapping pussies. Maybe the era of the house show is returning.

TIBM: What are your thoughts on ANTIFA? Go!

Chris Gebauer: Not really concerned with Antifa. As Dan would say, “I don’t negotiate with terrorists.”

TIBM: You have been within the Metal scene for some time now, with your Death Metal roots, and now Deadspace. If there is one thing you could change about the music industry, what would that be and why?

Chris Gebauer: I’d like music to get more fucked up again. I wouldn’t change anything about what other artists are doing because I have my own thing to do. But we are making changes to the way we run as a band full stop. We’re staying as self-functioning as possible. No label, booking things on a case to case basis and releasing music when we choose. I like to see more bands abandon the ‘hype train’ mentality and just put stuff out that’s good. There is nothing wrong with the high output if it’s high quality and has an agenda.

TIBM: What are the biggest challenges Deadspace has had to face as a band, and how did you overcome them?

Chris Gebauer: Well, there’s obviously internal dynamics but I guess the biggest is being a band that hardly anyone understands in a country where you never truly fit on a bill. Because of this bigger promoters don’t generally book us and we end up punk DIYing all our shows.

TIBM: After a big year of recording and touring, what can fans expect next from Deadspace?

Chris Gebauer: The new album is almost done, 10 tracks, seething with hatred and despair. I’ll be mixing that over the next month. Until that drops, we’ll have to wait and see. But we’re definitely not slowing down. Open the gates, more shows.

TIBM: Thank you for your time Chris.