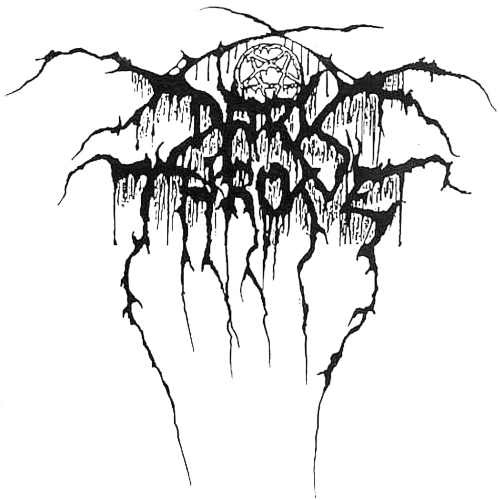 There’s very little that can be said about Darkthrone that has not already been said: They are Black Metal royalty; one of the most recognised, influential and enduringly popular bands in the movement’s history. Along with Mayhem and Burzum their early works have come to represent, for many, what Norwegian Black Metal – and by extension Black Metal as a whole – is all about, the band has helped birth a distinctive sound and aesthetic that has did much to define the genre.

Of course, while the sinister, icy and unholy recordings that make up the first part of their discography are milestones of Second Wave Black Metal, the last decade and a half has seen the band unambiguously moving away from that world altogether. Retaining the stripped-down and unfussy approach to songwriting – as well as a willful disregard for outside opinions – Darkthrone have dug into the metal (speed, doom, death, black, heavy, thrash, you name it) of the 1980s for inspiration, resulting in a sound that shares many attributes with their earlier works, yet at the same time bears a very different ambience.

Even within this context, 2016 album Arctic Thunder represented something of a break from the past, the band stepping away from the sound they had honed over the previous three albums, Dark Thrones And Black Flags (2008), Circle The Wagons (2010) and The Underground Resistance (2013). Around the release of Arctic Thunder,  Fenriz told this writer that he had consciously “sacrificed my need to sing [and create] those beautiful speed metal songs ala Sweden 1983-1985”, to instead make “slow heavy metal”, and that proved to be true.

The band’s latest opus Old Star, marks something of a continuation of this musical trajectory, certainlyon the three songs written Fenriz himself (‘The Hardship Of The Scots’, ‘Alp Man’ and ‘The Key Is Inside The Wall’). Interestingly those written by Nocturno Culto (‘I Muffle Your Inner Choir’, ‘Old Star’ and ‘Duke Of Gloat’) actually suggest a subtle nod to the Black Metal past, with faster tempos and even a bit more of a 1990s vibe.

This Is Black Metal: Speaking to the vocalist and guitarist on the phone (something of a rarity actually, as Fenriz has long handled the lion’s share of interviews), we begin by discussing what the reaction to the new work has been – in retrospect, probably the wrong question to ask.

Nocturno Culto: “[Laughing] Well I got a positive reaction from one person, but I don’t know what’s happening generally. We got a good review in a bad Norwegian newspaper, but that’s it, I haven’t had the time yet to look at what other people are saying. But it’s out there now, so what the hell what can I do? [Laughs] People will of course have different opinions as usual. It doesn’t really matter, but it’s always good when people like it of course.” 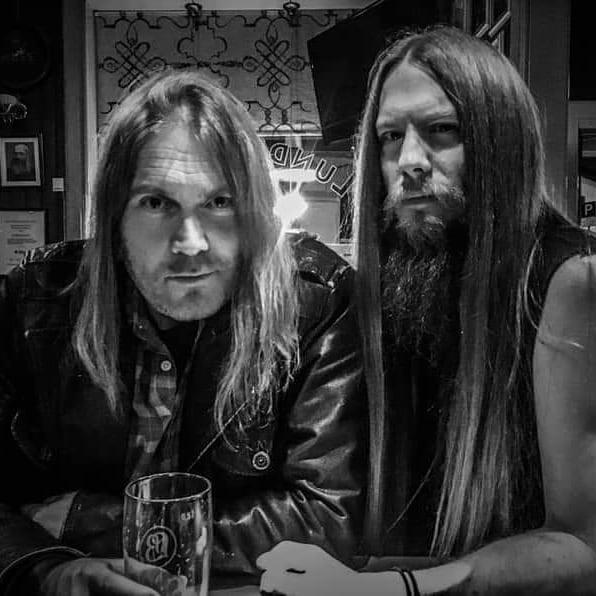 Nocturno Culto hanging out with Thomas from Mork

TIBM: As band you have always given the distinct impression that you are wilfully isolated from the rest of the world and even the rest of the extreme/underground music scene…

Nocturno Culto: “It’s like when we released A Blaze In The Northern Sky back in the day: I think it took at least five years before we realised the impact that the album had had because we were busy with everything else. We’re not very interested to know what people think of this album either. I think it’s good to have some feedback of course, because then you know what people like or dislike about the album, that’s always interesting, but it’s just for fun to know that, because we don’t know what the next album will bring.”

DARKTHRONE A Blaze in the Northern Sky Full-length 1992

TIBM: It’s interesting that the two of you are writing the music completely separately and only presenting the songs to each other when they’re finished. It suggests both a degree of single-mindedness and also that you have a great deal of trust in each other’s tastes and decisions.

Nocturno Culto: “Yes that’s exactly it. It has happened that we have had to choose songs that we have already recorded not to appear on an album – that has happened a couple of times, and then we are really serious in the discussion about what is the weakest song you know? And then we just get rid of it. It has been quite some years since we did that though.”

“But yes, we are always recording exactly what we are planning to do and when we meet we haven’t heard each other’s material, so I have to learn the guitar and he has to learn the drums. We’ve been playing together for so long that there should be no problem – we always make things the way we want it to be, and we try to put the overall sound together and we have to trust each other in that process, otherwise it would be very difficult. We have to fight with everything sound-related, in terms of the acoustics and everything.”

TIBM: These days you record in an actual bomb shelter with portable recording equipment as I understand it?

Nocturno Culto: “Yes the [equipment] we have used since The Cult Is Alive. The location is an old bomb shelter, located below a garage place just outside of Oslo. That’s the place we rehearsed in during the late 80s, we even recorded some demos there, so it was strange to come back some years ago when we went to record Arctic Thunder. It was very nostalgic – it even smelled exactly the same as it did in the 80s, same bad air quality [laughs]. The sad thing is that we thought we were going to record more stuff there, but the people that are renting the garage want to shut it down as they think the air quality is not good enough, and they do not have the money to do anything about it. So we are out of there now and need to find somewhere else for the next album.” 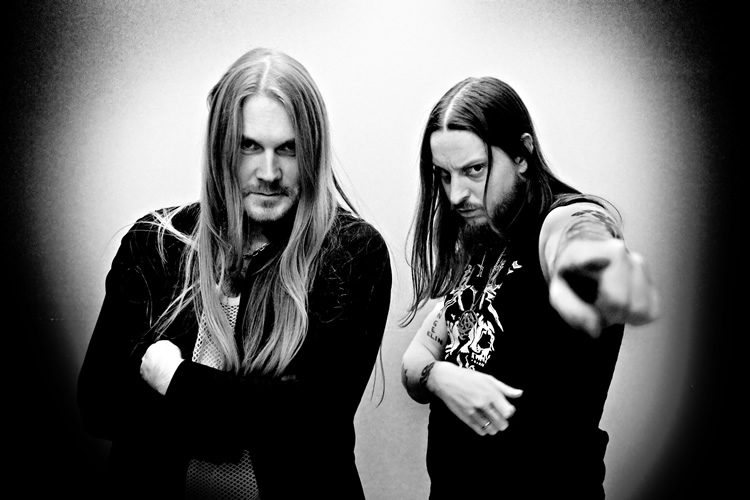 TIBM: Fenriz has always been very passionate about celebrating and analysing music, both in terms of other bands and Darkthrone itself. His descriptions of your recordings go into almost obsessive detail, with comparisons to older bands, albums and even particular songs, making Darkthrone one of the more self-referential bands in terms of the metal genre in some regards. Do you share this trait and are you aware of specific influences surfacing in your own writing?

Nocturno Culto: “Not at all. And I’m not interested either. I’m not interested in that stuff at all and when it comes to my own songwriting I don’t know what I base it upon, because for some years now I have had very little time to listen to music. But the inspiration comes from somewhere I guess, and that’s a ‘nothing and everything’ kind of thing. I do take it into consideration, because when I sit down and make music for Darkthrone it’s a very specific place to be for me. It’s not just coming a whole song, you know? You start to play around on the guitar, and then you have a riff, and you start to build on that to create a song, and so it goes. I have no idea where it comes from but with Fenriz’s [new] songs – I’ve seen people mention Accept and Iron Maiden, but I’m thinking more of all traditional heavy metal stuff from the 1980s and of course the influence that Celtic Frost has had upon us for years.”

Darkthrone – In the Shadow of the Horns

TIBM: Stylistically speaking, do you hear a big difference in the songs you write and the songs Fenriz is creating?

Nocturno Culto: “This is also some sort of living organism; some albums we can kind of write more ‘equal’ songs, but this time round Fenriz was very keen to write in the style he did and I have to admit I like playing those songs on guitar, as a guitarist it’s really fun to play. I did lean more toward the Black Metal thing this time with my songs, I’m not sure why, but I started thinking that way on Arctic Thunder and I just wanted to stretch it a bit further I guess.”

TIBM: Do you think Old Star is therefore a natural follow-up to Arctic Thunder?

Nocturno Culto: “Yes I think so. But I think it’s kind of different as well, though I think the frame of the album is basically in the same vein as Arctic Thunder. It differs in a lot of ways but it is based on the same idea.”

TIBM: It’s interesting how the band goes through these quite distinct album cycles. It seems like you both get into a certain zone and push that as far as you can go before moving on…

Nocturno Culto: “Yes that’s the way it is. We see a small path and we explore it, and then we try to see other paths that we will do better, and in the end we feel we can’t do it any better so we do a different thing.”

TIBM: Obviously Darkthrone’s status as a two-piece has been a pretty defining characteristic of the band since 1993. I was interested to know if you had any contact with the ex-members of the band?

Nocturno Culto: “Nope. Not for some years. I did have some contact with our old guitarist Ivar [Enger / Zephyrous] some years ago. I don’t think he is making music now.” 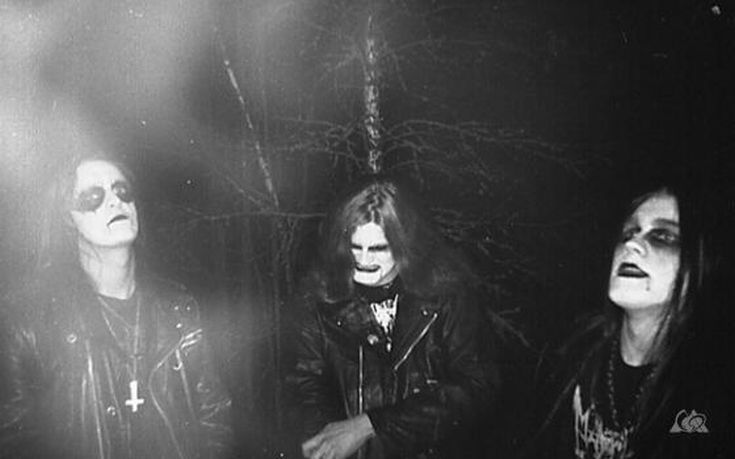 TIBM: A lot of bands your age will invite old members back for a cameo – would you ever consider inviting your previous members to do a guest appearance or something similar?

Nocturno Culto: “To be honest in 2005 or 2006 we wanted our old guitarist to come back to the band, and he was actually planning to – he got some equipment and started to practice – but then because of his work he had to amputate one finger and that was crucial for playing guitar. So that didn’t happen.”

TIBM: That’s a shame, but it’s also quite obvious that the band today is built upon the strong chemistry between the two of you.

Nocturno Culto: “The chemistry is great, nothing lacking there. I can see it continuing but it goes without saying that we will not last for 30 more years, so everything is uncertain and is getting more uncertain every year. But we have a new album in the making and we will try and record that late next year or maybe early 2021, so we will do one more album, that much is certain. But you never know what life brings.”

Thanks for your time Ted.