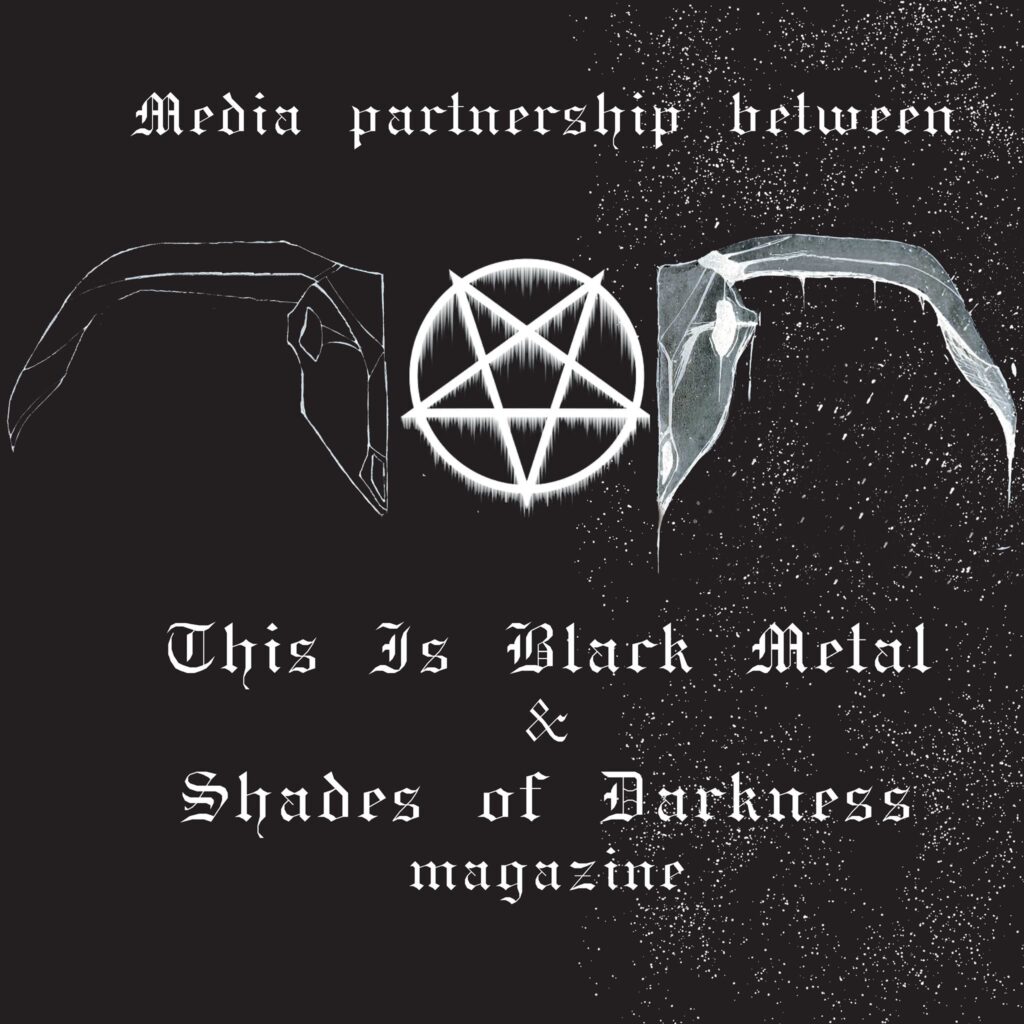 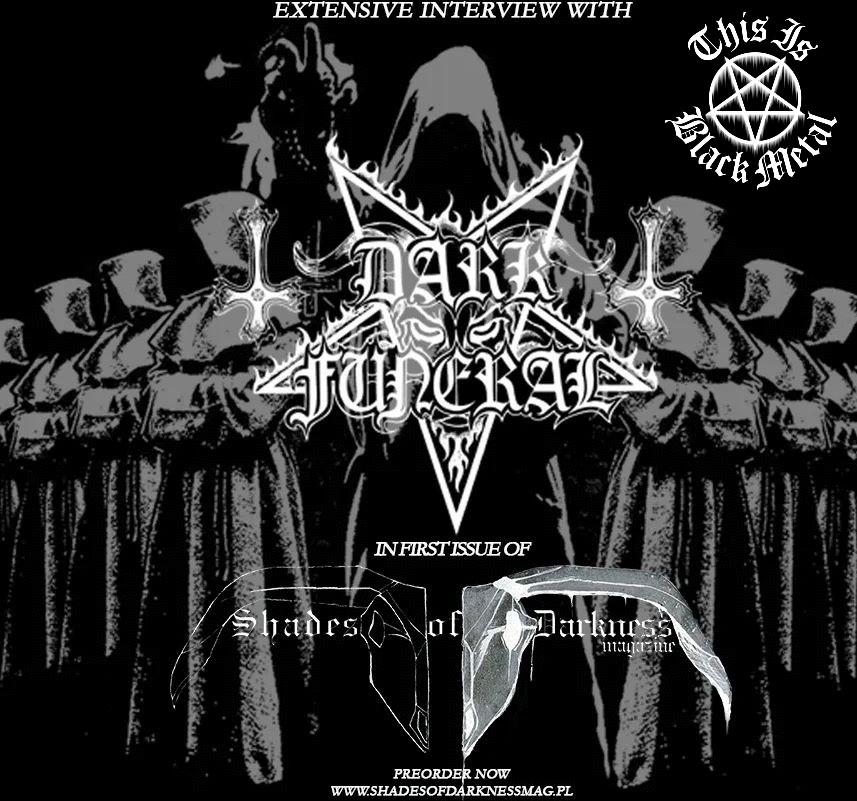 Weland: Generally drummers rarely give interviews. Do you think it is due to the fact that it’s usually guitarists and vocalists, who get the biggest spotlight, or is it because the drummers are more comfortable far from the media noise, safe behind their drum kit?

Jalomaah: Yeah, it’s a bit surprising. I rarely do interviews like this one, on the behalf of the band, so to speak. I’m not even sure if this one is on behalf of the band. If someone asks me to do an interview, I’m like: Sure. Let’s do it. I do them sometimes. When I got the time on my hand, which obviously I have a lot right now. Yeah, interviews are not a thing I do very often, but they are fun. Sometimes it’s good practice, because I’m usually just quiet. It’s cool, I’m not very used to being the one being interviewed, though.

W: You’ll get used to it! You are a fairly new member to the Dark Funeral line-up. How did you come to be their drummer? You played a lot of death metal before, so playing black metal, and its specific style, must have felt like a leap.

How did it happen? A common friend of Lord Ahriman recommended me for the job, because they needed the temporary replacement for a bit. I was so surprised that I was even considered, because I hadn’t really done much over previous years.

At that point I was thinking about quitting. I’d just stop pursuing that dream of mine and do something else instead. Weirdly enough, and I know it sounds like it’s a plot of a cheap movie, but I honestly decided to quit the very day they asked me whether I was interested in giving it a try.

I told myself, okay, I’m going to do something else, because that whole music thing is not happening for me. It felt like there was no place for me there. So I took the scaffolding job, and as I’ve learned, I’m really bad at it. I took it because I had to do something. It was time for me to grow up, I guess. I wasn’t really allowed to quit either, because the very same day I took that job, I got an email from Dark Funeral, waking me up from my little hiatus. So I had a really bad day, and now I was given a choice. Do I want to give it a shot, or do I just say no? Of course, I felt like I couldn’t say no. I had to at least try. I also knew that you don’t get this kind of opportunity every day. If I don’t take it now, I won’t get another chance. I realised it was going to be difficult, but I went for it either way. There was no talk about me being a permanent member or anything, but I just gave it my all from the day one. I was going to play in the Dark Funeral or at least die trying.

And from there on, it’s just been a three-year journey of planning the next years and playing and writing music with the band. Well, I haven’t written any riffs or anything but I’ve been involved for a long time and then allowed to do a part of the material. Everything went from nothing to: Oh shit, I’m in the band! Yeah, I don’t know, how did it happen? It was just a friend, who said, you should talk to this dude. It didn’t take long and Ahriman contacted me and from there on, yeah I’m a part of Dark Funeral.

W: How do you feel about being the youngest member of the band? Despite the big age difference, there are 25 years between you and Chaq Mole though, you appear to be working well together. Do you have a different approach to certain musical or organizational aspects, for example how intense the touring is?

J: Of course, but let’s be honest, age is just a number. We are all fucking childish.

But of course, I have a bit of a different approach to certain things. Playing wise, I’m not that different, but still. I had to adapt myself to the Dark Funeral way, obviously. I play as I’m expected to, and I’m constantly trying to get better. We have good communication when it comes to the musical stuff.

But one thing that is different is that I’m a lot more up to date, when it comes to equipment and technical things. When it comes to guitar amps and new guitar modelling. So I’ve been recommending a lot of gear to the guys in the band that we actually ended up using just to make touring a bit easier. It’s always better to travel with your own gear. Because of that we always sound the same everywhere, we are more independent.

So a few technical things. When it comes to the backline stuff, I have had a lot to add and change and just develop really. That’s the  thing I do anyway. I like working with gear, and they really don’t. So I think they’re just happy to have someone who is a bit of a gear nerd and likes to take that thing to the next level.

They can’t be bothered by all that technical stuff, they just want to sit and work on their music. I’m different, I want to be bothered. It’s kind of my thing.

W: Which drummer has influenced you the most, as a musician? Someone from the metal industry, or completely different musical realms?

J: Hmm. There’s a few, but the one who kind of gets the credit for me, even starting in the first place, like playing metal and stuff, was Jaska Raatikainen from Children of Bodom. He was the first one I ever heard play festival gigs. I didn’t even play drums when that happened. I was 14 or 15, something like that. Because I grew up in the middle of the woods, I didn’t have the internet but I couldn’t illegally download music like all my friends could.

I was in Finland, visiting friends and then I heard Children of Bodom. And for the first time, I was like, What the hell is this? Why are the drums sounding like that? That’s pretty cool. And it got me interested in playing. My dad was actually a drummer, and he really wanted me to play drums. And my parents would force me to play, and just because of that, I wouldn’t want to. But then I heard that sound! And then I heard the Death Cult Armageddon album and the two albums with Nick Barker. I heard that and then I heard symphonic black metal. I was like: What is this? The whole new world was open to me! So, and it is not far after that. I heard Nile.

W: Okay, I have a feeling that not asking you about the pandemic these days is highly appropriate. So, in a few words, how are you feeling in these strange times?

J: I’m bored. I’m really bored. Like, I’m locked in my studio, which I’m very grateful for. I can sit in my studio and just keep recording, keep practicing and I can still do music. But I’m bored. I want to play a gig with my band. That’s all I want to do. And travel. That’s what my life has been for so many years. Even before Dark Funeral, so it’s strange to me to sit at home. You know, I don’t have it bad here. It’s pretty good. I have everything I need. But I’m very bored. That’s about it. Yeah. I’m guessing you have pretty much the same situation.

W: There is nothing we can do at this moment with this situation. Thank you for your time!

Interview: 1349
Shades of Darkness Magazine August 30, 2021
This Is Black Metal ©All rights reserved.