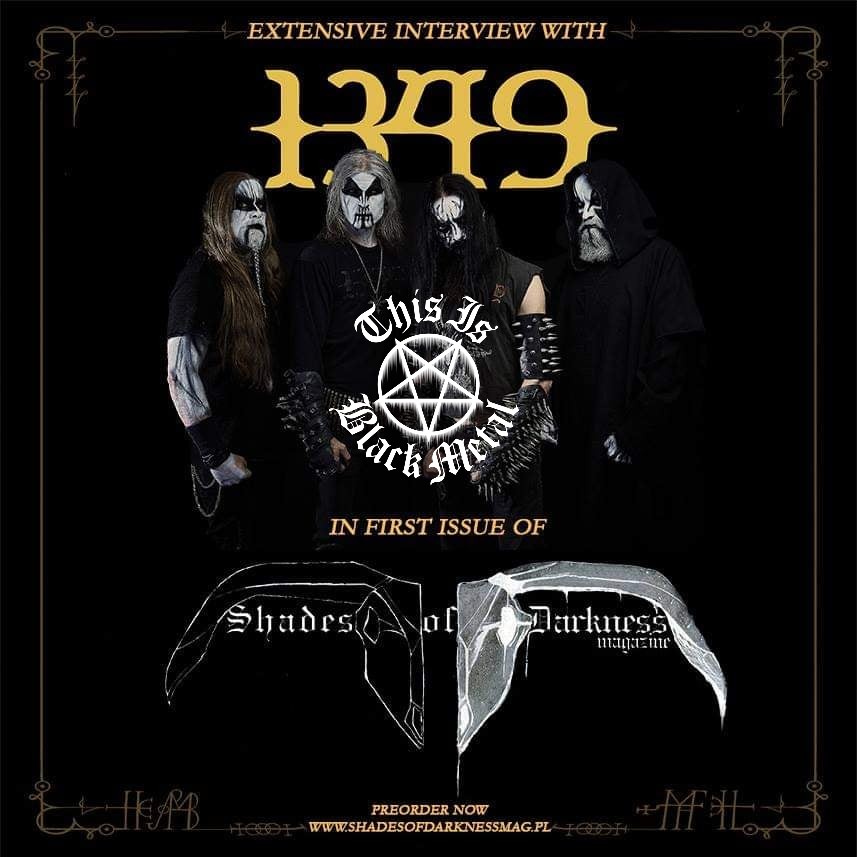 Weland: You can’t deny that the time in which we have come to talk is unusual. How do you perceive what is currently happening in the world, I mean a global pandemic?

Seidemann: Well, here’s the thing. Right now, we look at the collapse of a lot of old institutions and industries. Take the music industry for instance, it has been going to some strange places for a while now. The record sales went to hell, we can’t play live anymore. I guess we can do live streams but it’s not the same.

Some bands are already disappearing never to be seen again, and I think we are gonna lose a lot more. Let’s be honest, I had to find a day job, because at this moment, there is barely any money from the music, without the shows and all that.

W: I think many of your fans support you any way buying a match or CDs vinyls. I, for example, am a proud owner of a couple of 1349 vinyls. However, I understand that this is not enough to pull you out of this situation

S: Yeah, we are blessed with loyal fans who actually buy our stuff. It’s great that vinyl is still a thing in the metal scene, like it was when I was a kid, you know, those vinyls,  tapes, and occasionally CDs. We would buy all that stuff because we wanted to support the artists. That way of thinking still exists in the metal scene.  I’m not really playing anything else other than metal, so I don’t really know what’s happening elsewhere. But I imagine that streaming has kind of killed that culture of supporting artists.

W: The last time we had a chance to meet, was last year in February, at the concert of 1349 in Warsaw.  These were some last shows, which 1349 played to celebrate the release of „The Infernal Pathway”. Don’t you feel a bit unsatisfied, that the concerts promoting this album ended so quickly? Do you plan to finish the promotion of „The Infernal Pathway” after the pandemic, or maybe a completely different tour will take its place?

S: Well, we would like to get back out there. We usually have a longer period of time to promote stuff. I’m worried because of the pandemic, it’s been almost two years now since The Infernal Pathway, and of course, we still got to tour Europe and the US before, before everything went to hell, but it was cut short.

I imagine that when this is all over, there is going to be a huge demand for live concerts, and the new music. I suspect that we will have to do a new album pretty soon after this.

W: I want to talk about it as well. I have to ask, has the lockdown affected the creative process of 1349? And could you tell us more about it?

S: Well, here’s the thing. I live three hours away from Oslo. Which means that with the restrictions all I have not seen the older guys from 1349 since we came home from the tour in February last year. So, I haven’t been to a single rehearsal, I’m not even sure if there has been any rehearsals, because we’ve been locked down.

W: But I guess you have new material, new ideas, riffs, stuff like that?

S: I assume that there are things going on. Luckily, we have a competent composer: Archaon. So, I assume that he’s using his time wisely and that he will have something ready for us.

Of course, there’s always the rest of us also making material, and we communicate well, digitally, like everyone else is these days. It’s been a strange time.

That goes for Mortem as well. Of course, we haven’t really met as much. But we have recorded Slow Death demo, with an extra track.

As for now, I can’t give you any details because, well, only time will tell.

W: That’s great! Good to hear some news from Mortem camp. The last question, the question about the Infernal Pathway. In hindsight, how do you judge both, the material, and its reception among fans?

When it comes to playing it live, we had a lot of good responses. People know the songs which was really surprising when we did European tour. It wasn’t just the old songs, but people actually wanted to hear the new stuff particularly Through Eyes of Stone. This song is kind of short and sweet and trashy. So it’s easy for the crowd to get into it.

The smaller songs from the Infernal Pathway, like Abyssos Antithesis or Striding the Chasm, were pretty well received. People were actually singing along to that last one. Generally, in terms of reviews and crowd response, we have been very happy with the reviews we got for The Infernal Pathway. I mean, a lot of people seem to understand the amount of work that we put into it. And the production value is, of course, fantastic. Again, thanks to Jared Pritchard, our engineer who has been doing our live shows since 2008. We’ve had him with us for last couple of albums. He’s been doing the studio work as well, and he’s  fantastic at what he does

W: Thank you for your time. And is there anything else you would like to add?

S: Thanks, for the interview for staying metal and supporting the scene and us in it. And if there is any silver lining, I think it’s the fact that this crisis will bring the fans closer. When a lot of stuff is taken from you, you learn to appreciate it more. I think when we can all go back to performing live and going to shows, it’s gonna be much more appreciated than it was when you could just go every day.