Aesthetics of Black: A Tribute to Black Metal Covers 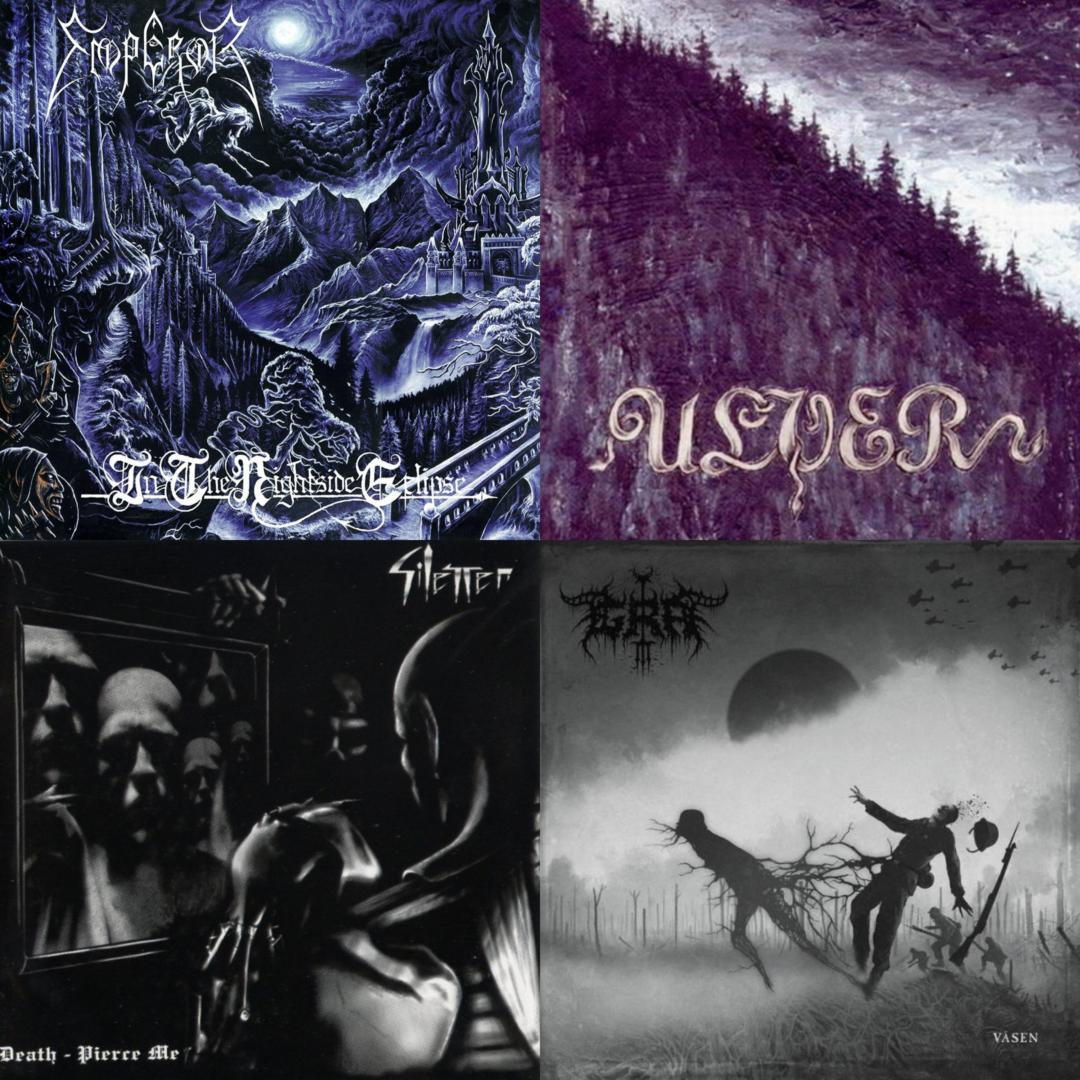 Black Metal music has given us many great albums that have even shaped the whole Metal genre with its music and way of life. Many of them also had amazing or symbolic covers that made a difference, even in the artistic field. In this new article series, we are going to present the story of great Black Metal album covers, with some shiny creations of the later ages. 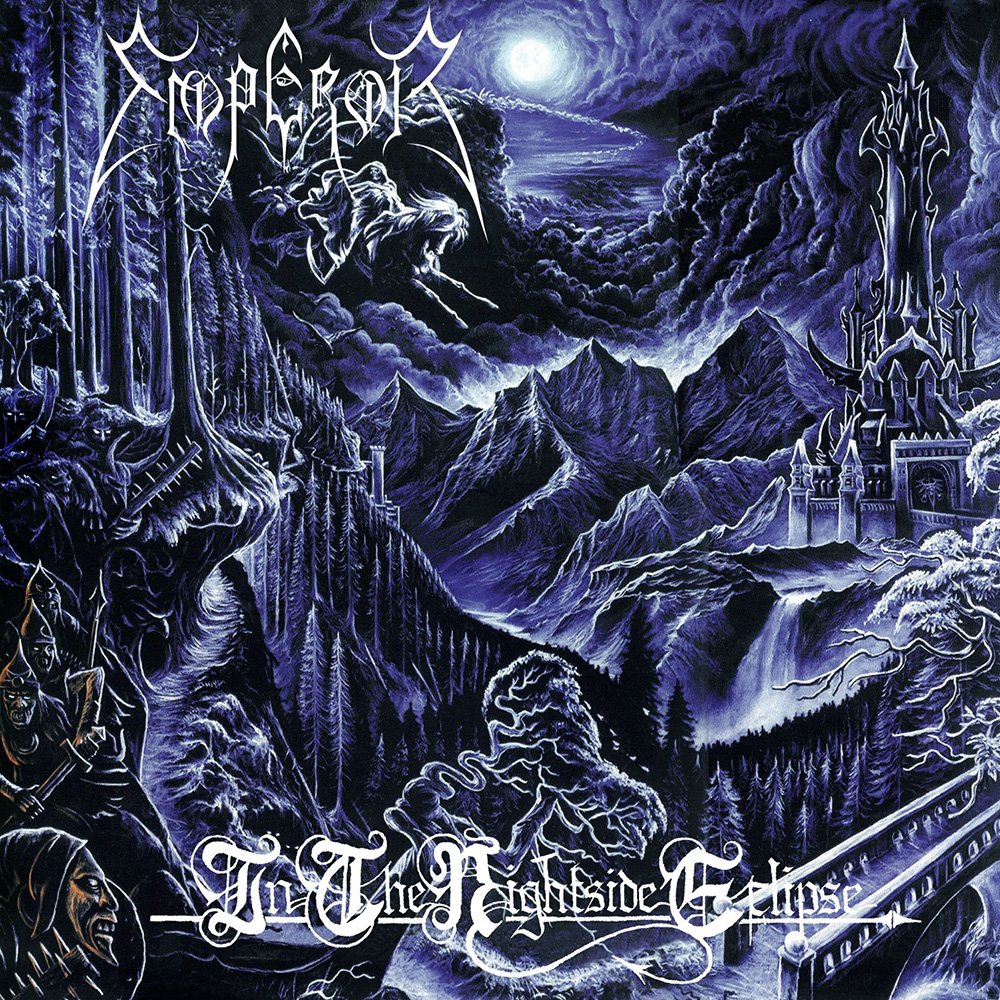 After the release of a demo, an EP and a split with Enslaved, it was time for Emperor to unleash their first full-length album with the title In the Nightside Eclipse, blending Black Metal with Epic Symphonic elements. The most part of the music was already written, but significant troubles appeared in front of the band: Two members (Samoth and Faust) were facing serious legal penalties-the first for church arson and the second for the murder of a homosexual man. Thus, the album mix happened in 1994, although it was recorded a year before, with Ihsahn and Samoth being the only band members presented in the album`s production.

Emperor`s debut was created by “Necrolord” (also known as Kristian Wåhlin) and it is considered one of the best in the genre. When we look at it, the first thing being noticed is the deep blue colour that dominates, something uncommon back then for a Black Metal cover (the bands were using mostly the Black and white motif). The moon shines a cold light at the top of the sky and is surrounded by dense clouds, which as they descend receive a touch of black color. The reason why is simple: Through them, one of the horsemen of Revelation emerges, Death (this part was taken from the painting  “Death on a Pale Horse (Revelation)” by Gustave Doré and was used also in their Emperor EP). Below him, we observe eagles flying next to mountains with steep slopes.

At a place so wild and dark, which can exist only in an other world (at this case in Middle Earth), stands alone a castle that has been corrupted by its new inhabitants: Minas Morgul. The old fortress of men, formerly known as Minas Ithil, was conquered by the minions of Sauron and now has become a base for his army which attacks constantly at the forces of light. As we are keeping away from it, we see dense forests with dark creatures living in them, waiting for their unlucky prey. Finally, on the left side orcs are heading to the bridge, coming back to their home.

The general feeling that the cover is giving is exactly that of the Norwegian Black Metal: Cold atmosphere and darkness with a taste from the metaphysical world. Its influence is enormous in the genre, as it is one of the covers that allowed their enrichment, as opposed to the minimalist monopoly. 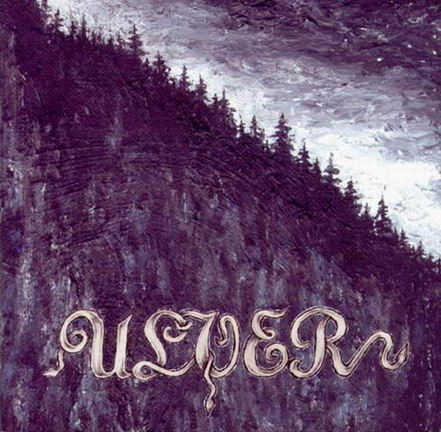 Ulver`s vast music journey started with Bergtatt, an album that was by far different from the other releases of the era. There is diversity in the structure of the songs, with folk passages, choirs and clear vocals, together with classic Black Metal elements. Also, the lyrics were written in the archaic style of writing of the 19th century Dano-Norwegian kingdom, which intrigued the band at the time, in combination with the myths that prevailed in the Middle Ages in the wider region. The album narrates the story of a young woman who gets lost in a forest and being hunted by its dark creatures. Eventually, she is slain by them, and her spirit becomes one with the forest.

The creator`s name is Tania Stene and at first sight, we get an idea about the album`s music. The sky is dark with very few stars trying to shine in vain and below him we observe some distant snowy slope. Nevertheless, it monopolizes a large and dense forest, which is snowy and full of fog, which obstructs any visibility and leaves no impression of life on it, except for the dark creatures that do not belong to the human world.

Although the cover is simple, some emotions are being generated on viewers: Melancholy and nostalgia for a place that we have never visited, but on the other hand, seems familiar. These are the first ones but soon fade away, as the frozen atmosphere disappears every positive thought, while we are becoming aware of the fear of the woman that tries to escape from the forest`s monsters. 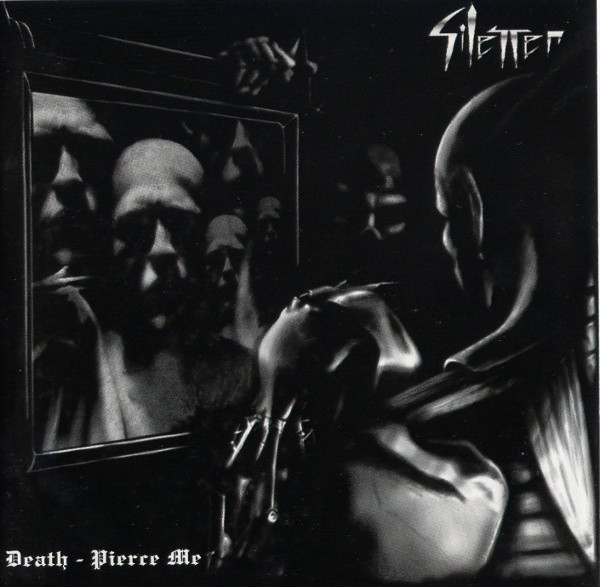 Silencer was one of the most unique and at the same time symbolic bands in the genre of Depressive Suicidal Black Metal: He has only one full length with zero live concerts. The album is dark and cold, filled with screams of agony and despair, with rumors saying that Nattramn was cutting his wrists while he was recording his vocals.

Olaf Eckhardt managed to capture immediately our attention with the darkness that completely surrounds the cover. The only thing we see clearly is that we are in a room with a mirror with a person staring at it persistently, holding at the same time his hands as if he is meditating. With this process we see that within him there is a tunnel, which ends up in his hands, slowly coming out of his dark inner world.

The product of this act makes him able to see the reflections of his personality, staring back at him without any trace of emotions. One of them we can observe that is trying to break free from the mirror at the upper part of it with its hands unsuccessfully. At the same time, another personality comes out from the darkness on the right side, which is the one who has the upper hand over the other personalities to the viewer.

The agony of the protagonist to understand himself is transferred to the album viewer piercing him with anxiety. The combination of the cold atmosphere with the shrieking vocals are giving birth to a dark thought: How much darkness is hiding in every human being and are we really willing to accept it? 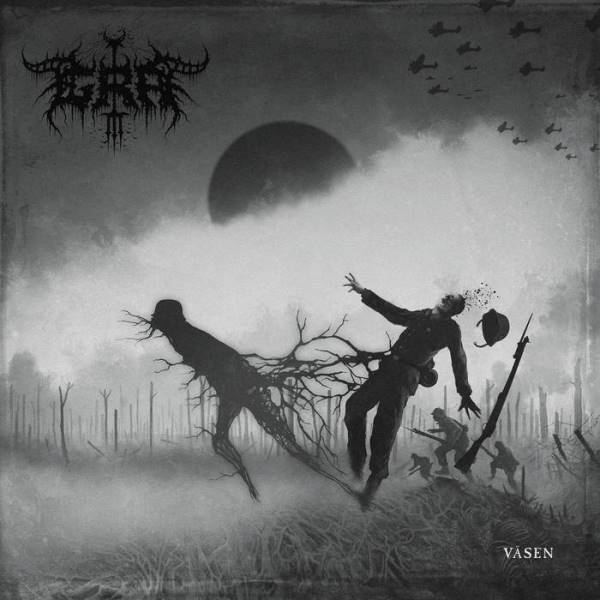 The third chapter of Gra finds them as a quartet, with Vediger filling the position of the bassist while leaving behind them the concept with Charon. Thus, they continue their deep journey to dark and unknown realms for all human beings.

The creator (Axel Torvenius) inspired it from both album`s music and  Heljarmadr`s suggestions about it. We can see the domination of gray, with its many shades, together with some parts of black which give us the mood of the album: Heavily gray. The sky is dark with a covered sun by the moon, hiding any rays of hope that human creatures are searching for. Meanwhile, air force planes suddenly appear, ready to bombard anything on the ground.

However, no one there could easily observe them, not only because of fog and smoke that is being crawled on it but because of a fierce battle is raging on a forest that has lost any trace of life. Soldiers are moving determined forward against their enemy, but even in death, it is impossible to be stopped. A true evil soul will go on, until it completes its mission, and ravage anything.

The horror of war with the paranoia that brings in his path, together with the terror that conquerors are spreading, is masterfully painted on the cover. The color choice absorbs any positive feeling that could be created from a brighter one, thus reinforcing all the above negative emotions.